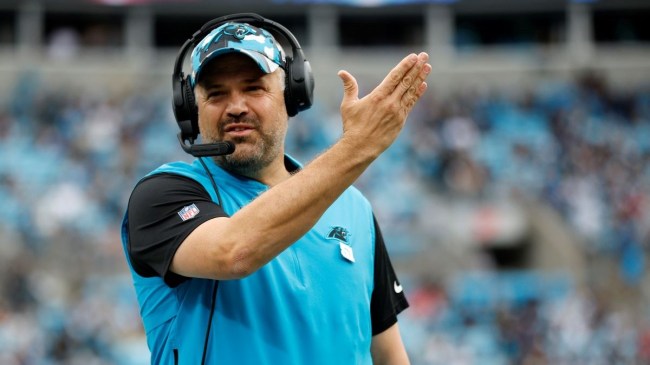 The Nebraska Cornhuskers have their new head coach and college football fans aren’t exactly sure what to make of him.

The Huskers have been on the search for a new coach ever since they paid Scott Front a ton of money to disappear back in September. Frost, a Nebraska alum, was hired from Central Florida in 2018, but proved to be an abject disaster at his alma mater. He went 16-31 in just over four seasons at the helm of the Huskers and never won more than five games in a season.

Assistant coach Mickey Joseph then took up the mantle of interim head coach. But it was always likely that Nebraska would look outside the program to find its new head man.

A number of names came up in the process, including current Kansas head coach Lance Leipold as well as Deion Sanders and then Carolina Panthers head coach Matt Rhule.

The Panthers then parted ways with Rhule, who had his own struggles in the NFL. But that didn’t seem to turn off the Cornhuskers.

Rhule’s pedigree in the college game is pretty impressive. He took over a struggling Temple program in 2013 and led them to back-to-back 10-win seasons in 2015 and 2016.

On paper, Rhule seems like the perfect fit to turn around a Nebraska program that hasn’t beaten an AP Top 25 program in years.

Which is what the Huskers thought when they gave him an eight-year contract on Saturday.

The future is bright in Lincoln.

Nebraska fans seemed fired up about the hire.

But not everyone was sold.

It’s sad to see them get their hopes up like this over and over again https://t.co/tt3SYz817Q

Gonna miss the Mickey Joseph era, the man steadied a program in crisis and brought so much honor, conviction and heart to his job.

The way players and this state responded shows the respect and trust Mickey had built in a short time.

Nebraska is a looooooong way from the glory days of the 90s. But hiring Rhule feels like a nice step back in the right direction.