Nebraska Cheerleader Gets Absolutely Rocked By Football To The Head, Flexes On The Haters (Video) 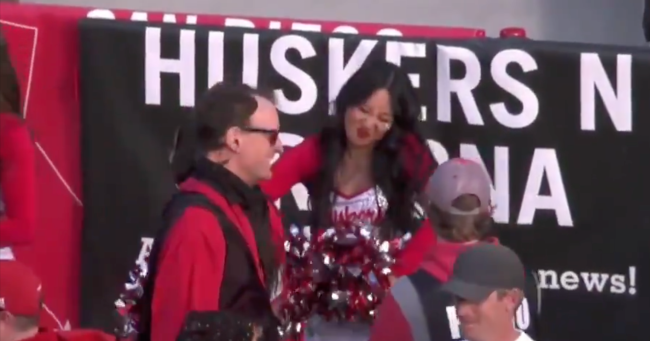 ​Who says that cheerleading isn’t a contact sport? This cheerleader would certainly beg to differ.

During Friday’s rivalry game between Iowa and Nebraska, quarterback Spencer Petras took over for starter Alex Padilla. Not only did he leave the Hawkeyes back from a three-score deficit, but he left a warning shot to the Cornhuskers on his way out— unintentionally.

Midway through the fourth quarter, down by three, Petras rolled out to his right. With nobody open and a defender on his tail, the 6-foot-5 redshirt junior decided just to throw the ball away.

Little did he know, on the other end of the pass, an innocent bystander was not paying attention. The bystander, a Nebraska cheerleader, never saw it coming and got absolutely DOMED by the lame throw.

She immediately threw her hands up to block her noggin, but it was too late. The damage had been done.

Fortunately, she was completely okay and took it like a champ. As those around her quickly ran over to check on her, the cheerleader wore a big smile across her face and flexed on everybody to let them know that she’s tough.

#Huskers cheerleader takes a pass off the head, smiles and flexes. pic.twitter.com/zPthA8FFrc

Unfortunately for her, the team she supports went on to lose. Now, instead of having a sore head after a win, she has to ride the bus home after getting ROCKED by an errant throw and after a loss. It certainly doesn’t help the minor injury feel any better.