Nebraska Fans Are Absolutely ROASTING P.J. Fleck Ahead Of This Weekend’s Minnesota Game 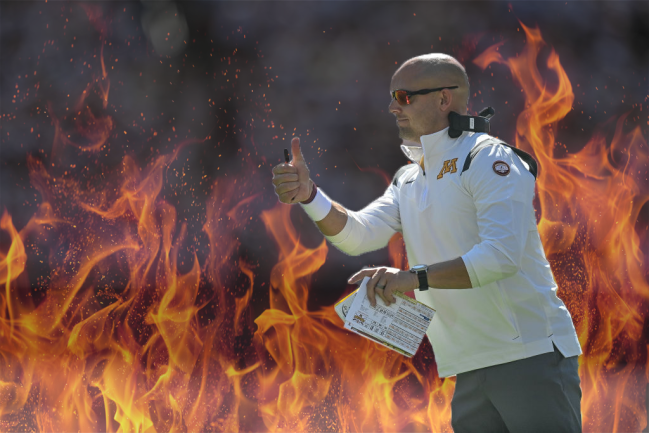 As Nebraska football gears up for its game against Minnesota on Saturday, the ever-hilarious $5 Bits of Broken Chair Trophy is on the line and both three-win teams are playing for a chance to get one game closer to a bowl game. Ahead of the game, Cornhusker fans are having quite a bit of fun online.

Late afternoon on Friday, Golden Gophers head coach P.J. Fleck began to trend on Twitter. Unfortunately for him, it was for all of the wrong reasons.

Nebraska fans were absolutely flaming him with some hilarious quips. Although things quickly escalated beyond just the fans in Lincoln, all of the jokes were in good fun and most (there are always a few outliers who take things too far) of them did not cross the line.

Take a look at some of the best ones:

PJ Fleck still uses a checkbook at the grocery store.

When PJ Fleck goes trick or treating he goes as PJ Fleck.

PJ Fleck "borrows" your favorite pen and forgets to give it back.

Pj Fleck cruises the speed limit in the left lane.

Pj fleck reminds the teacher about homework on Fridays

PJ Fleck prefers to use the word trousers.

PJ Fleck asks fans to sit down at football games

Pj fleck is who let the dogs out

This is my personal favorite:

PJ Fleck has telemarketers hang up on him.

And this is my personal “close second”:

Fleck did not acknowledge the jokes, which is probably for the best. However, it would be an absolutely legendary move if Minnesota beats Nebraska on Saturday and responds to the win by tweeting a Fleck joke.

The Cornhuskers and head coach Scott Frost are four-point favorites on the road, but the last two games have gone in favor of the Gophers. Kickoff is scheduled for noon eastern on ESPN2.

Will Fleck Row the Boat? Or will his Friday roast turn into a year-long thing for Nebraska fans?