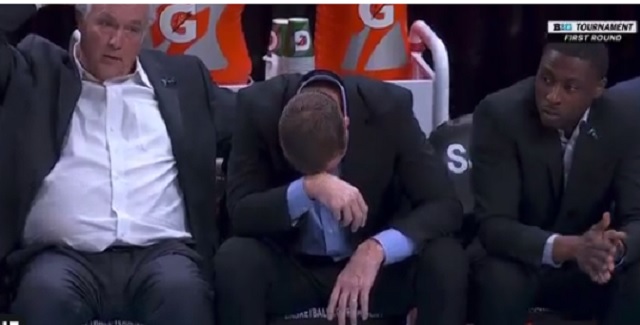 Nebraska head coach Fred Hoiberg decided to coach during today’s Big Ten tournament game and was forced to leave after falling violently ill on the bench in the second half.

Fred Hoiberg who is coaching the game while fighting an illness just left the court with several minutes remaining in the game. Hope he’s ok. pic.twitter.com/hBwjl9dQ31

Hoiberg was later taken to the hospital for more testing.

Nebraska head coach Fred Hoiberg been taken to the hospital, source told @Stadium. Was sick, left the game early and was told to go to be checked out immediately. https://t.co/OPs1nmNTZg

Per @GoodmanHoops, Fred Hoiberg has been taken to the hospital after leaving tonight’s Big Ten Tournament game with an illness.

Nebraska players were not allowed to leave the arena after the game was over.

Nebraska men’s basketball team is not leaving Bankers Life Arena. They were brought their food outside the locker room. They are not letting people back to the area now. I just walked back to the area here and they told me no one from Nebraska will be made available.

Update: Nebraska players have been allowed to leave the locker room.

The Nebraska basketball team can now leave the locker room and head onto their bus, per @heady_chris https://t.co/IQuOtr0T4Q

Hoiberg has since been released by the hospital with the flu and has not been asked to self-quarantine.