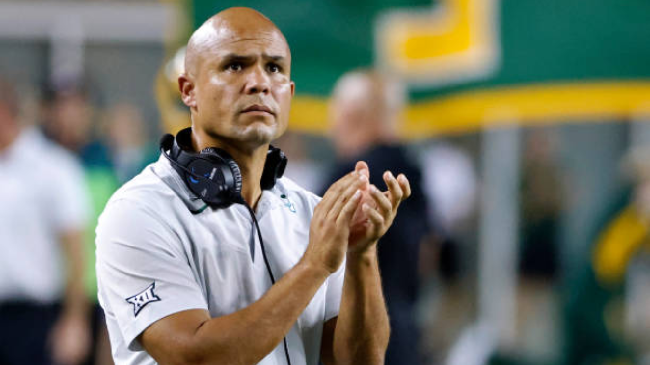 It looks like Nebraska is going to take a big swing in their pursuit of their next head coach.

The Cornhuskers fired Scott Frost after just 3 games this season, leaving them searching for the next man they believe can turn their program around.

In their first game since the firing, Nebraska was dismantled by the Oklahoma Sooners in a home game they lost 49-14.

Before the game, college football insider Bruce Feldman discussed the leading candidates to take over the Nebraska job, naming 3 outside hires and the team’s interim head coach as possibilities.

Yesterday, Drake Toll reveled on the “Locked on Baylor Podcast” that there is another name college football fans should be keeping their eyes on. According to Toll, sources are telling him that Nebraska is going to make a “kitchen sink” offer for Baylor’s Dave Aranda and the Bears’ head coach is going to take it.

NEW: Sources according to @drakectoll say Nebraska is going to “give the kitchen sink” to make Baylor head coach Dave Aranda the next head coach of Nebraska.

“Dave’s going to say yes,” according to his source. pic.twitter.com/EGnQa2fDPy

Aranda had a rough first year replacing Matt Rhule, leading Baylor to a disappointing 2-7 season. However, he quickly turned it around in Year 2.

In that 2nd season, the Bears went 12-2, winning the Big 12 title game and the Sugar Bowl. This season, the Bears have started the year 2-1 with the lone loss coming in overtime in a road matchup with a ranked BYU team.

Those results are exactly what Nebraska will be hoping for in their efforts to move on from Frost.

It looks like Nebraska is ready to do whatever it takes to get their program back on track with their next coaching hire.