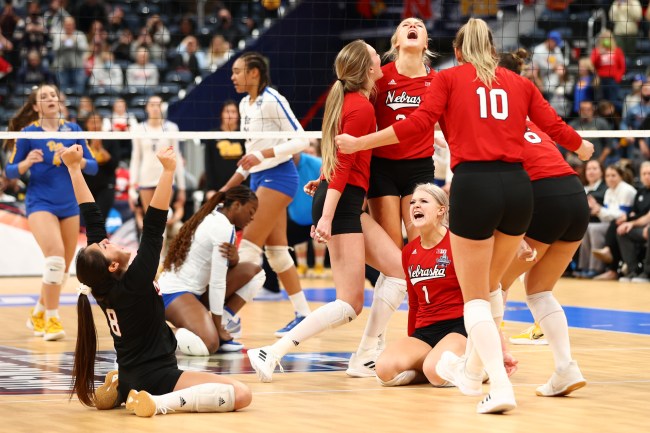 For the 10th time in program history, Nebraska women’s volleyball will compete for a national championship. This year, however, it was not expected.

The Cornhuskers entered the postseason as a 10-seed. Since then, they have knocked off 2-seed Texas and 3-seed Pittsburgh to advance to the NCAA championship match against the 4-seed Wisconsin.

After falling behind against the Panthers on late Thursday night, Nebraska rallied to win three-straight sets and the match 16-25, 25-17, 25-20. As a result, head coach John Cook’s team will play in the national title match for the third time in the last five years.

Should they beat the Badgers, it would be the sixth national title in program history.

To get there, it required some late-match fireworks.

Holding a 24-22 lead in the third set, Nebraska set up to receive the serve.

The serve came over the net, a great pass set up a set to the outside, and the hitter played a swing just to keep the ball in play. On the return, Pittsburgh also pushed to the outside.

However, on the other side of the net, the Cornhuskers set up a massive double block and stuffed the attempt directly back down onto the floor. The huge roof won the match for Nebraska and sent the bench onto the court to celebrate with a dogpile.

Nebraska, the 10 seed, will play for the program’s 10th national title #NCAAVB pic.twitter.com/o6v8TkXuiO

Walk-off blocks are exhilarating, especially when it advances your team to the NCAA finals. Listen to the deafening dud as the ball comes back over the net and is met by the vicious stuff.

It was a big moment for the program, but it was an even bigger block.

when your teammate gets that monster block. 😝 pic.twitter.com/qjXWd4PVkA

Nebraska will play Wisconsin on Saturday night for a chance to win it all as the 10-seed.