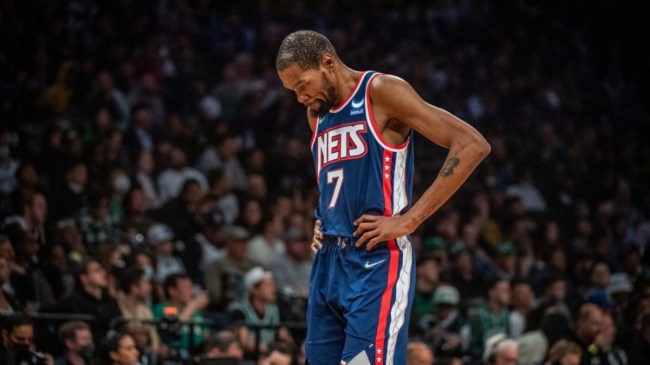 The Brooklyn Nets took on the Philadelphia 76ers on Tuesday night. It was the first time Ben Simmons faced his former team and as you can imagine, fans gave him a cold welcome. After the contest, Kevin Durant opened up about the stigma placed on Simmons, himself, and Kyrie Irving this year.

After the tough loss, Kevin Durant was asked bout the fans booing his teammate. However, the Nets’ superstar forward opened up about the “hate” his team faces together. Not just Simmons. Durant reveals that he and Kyrie Irving are also facing a lot of hate from other fanbases and claims, “It’s just something we gotta deal with,” per Nets Video.

Kevin Durant certainly isn’t wrong with this take. People are not happy with Kyrie Irving over his off-court antics. Meanwhile, Ben Simmons receives flack for everything he does on the court. As for Durant, he seems to get a mix of both.

At the end of the day, Brooklyn needs to find a way to get back on track and shut out the outside noise. It won’t be easy to do, as they’re likely to hear the boos in every away game, just as Kevin Durant says. So, we’ll see how it plays out, but for now, the Nets have some work to do to right the ship.