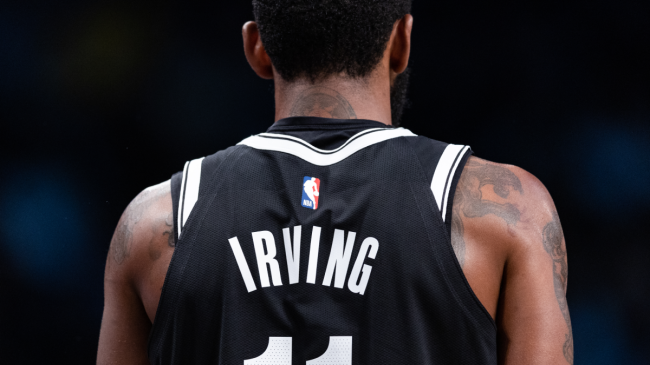 The Kyrie Irving saga in Brooklyn has taken yet another turn. The controversial figure has had a tumultuous relationship with the organization dating back to the offseason.

Following the conclusion of last year, Irving decided to test the free agency market. He publicly bashed the Nets’ front office before ultimately accepting his $37M player option to return to the Big Apple for one final season. According to one notable basketball source, he may not make it through that campaign if the Nets have their way.

The offseason signing tentatively eased the rocky partnership between the two parties, but controversy continues to follow Irving. He’s recently been criticized for his promoting an antisemitic movie on his social media accounts. That post led to a suspension, as well as a pause in his relationship with apparel company Nike.

It seems that Brooklyn has had enough of Irving and is ready to cut ties.

According to NBA insider Sam Amico, the Nets would like to deal Kyrie if given the opportunity. Here’s what Amico had to say on HoopsWire.com.

While star point guard Kyrie Irving has returned from an eight-game suspension, the Nets may have grown weary of what they view as continuous drama. But if they’re looking to trade Irving, it may not be so easy.

Sources have told Hoops Wire that the Nets would like to move Irving, but his trade value isn’t exactly at an all-time high right now.

The report caused an uproar from Los Angeles fans who want to see Irving in a Lakers’ uniform. Many chimed in with reactions online.

One person says, “If the Lakers are smart, Kyrie would be in an LA jersey soon,” after seeing the report. Another commented, “Kyrie to the Lakers confirmed.”

While fans might want to see Irving in a Lakers’ uniform, Amico reiterates that the interest from most NBA teams isn’t all that high. Despite his unbelievable talents, the never-ending drama that surrounds the star has made him “radioactive” to potential trade suitors.

Some say that even dropping the asking price for the point guard wouldn’t help. For now, maybe to the dismay of Los Angeles fans, the Nets appear to be stuck with Kyrie.