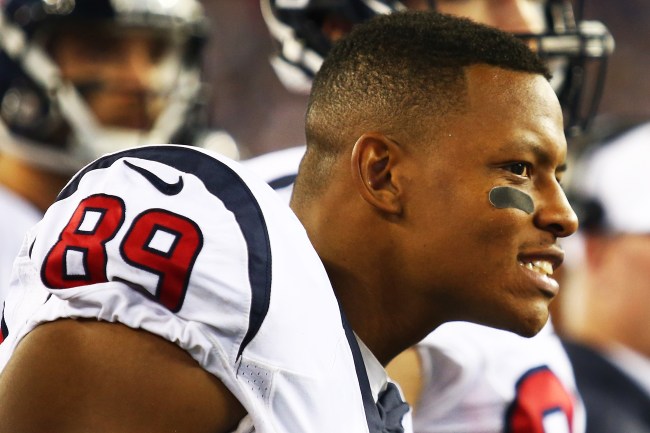 The New England Patriots are, arguably, the greatest dynasty in sports. Given the fact that they won the Super Bowl during the 2001 season with an unknown quarterback named Tom Brady, and are one win away from returning to the Super Bowl for the third-straight season with that same quarterback, it’s been an incredible ride that every fan outside of Boston is envious of.

But, boy, they sure do have some interesting ways to help motivate their players.

While, just last week, I wrote about how the entire franchise is using this “Patriots vs. The World” mentality, another interesting little tidbit recently came out that got my attention. That would be the news that current tight end Stephen Anderson — who just joined the New England Patriots from their practice squad this week — said he hears a lot of comparisons to Aaron Hernandez of all people, who’s a man most fans would think had his name retired from the Patriots given his off-the-field history.

That’s according to the Twitter account of Zack Cox from NESN, who spoke with Anderson about the Hernandez comparisons, with the player saying he “always hears about Hernandez” during practice, which just seems weird to me.

Tight end Stephen Anderson, who was promoted from the practice squad this week, said he’s incorporated aspects of Eric Ebron, Chris Herndon, Jordan Reed and even Aaron Hernandez into his game:

“I always hear about (Hernandez) in practice, so I definitely took a look at him.” pic.twitter.com/1OXVLGZY9F

Obviously, coaches and teammates aren’t referring to Stephen Anderson as a cold-blooded killer — or so I hope — but more so his play on the field and who he should aspire to become when playing. Still, given the terrible incidents of Hernandez that ended with him hanging himself in a prison cell, it’s odd to think that anyone in the New England Patriots organization is tossing the guy’s name around. I mean, if someone told me I remind them of a murderer, I wouldn’t exactly be too thrilled about that.

But, hey, this is the New England Patriots we’re talking about here, so they’ve got their own “Patriot Way” of doing things — no matter how strange it might seem to people like myself who are outside of their facility.