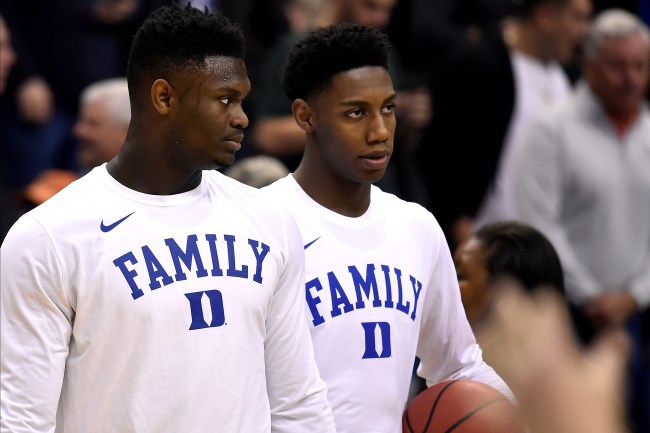 The New Orleans Pelicans are out here making moves, guys. After trading away superstar Anthony Davis to the Los Angeles Lakers this past weekend — scooping up an insane haul in return for the All-Star big man — the front office of the Pelicans appear to be stepping on the gas even harder leading up to this week’s NBA Draft.

The Pelicans, who already have the No. 1 pick — which they’ll use on former Duke sensation Zion Williamson — are also reportedly trying to hook up Zion with his former Duke teammate, RJ Barrett, with writer Marc Berman of the New York Post suggesting that the New Orleans Pelicans have “had internal talks about moving up to the second pick.”

Following the Anthony Davis trade with the Lakers, New Orleans holds the fourth pick in Thursday’s draft and is exploring all sorts of options.

According to an NBA source, New Orleans has explored moving back to gain more assets and also had internal talks about moving up to the second pick to take Memphis’ selection and draft RJ Barrett to team with his Duke compadre Zion Williamson. Barrett and Williamson are best friends.

After acquiring two former No. 2 overall picks from the Lakers in the Anthony Davis trade — Brandon Ingram and Lonzo Ball — along with swingman Josh Hart and three first-round picks, the Pelicans are suddenly the darlings of the NBA, with lots of options as to what they might do as they move towards the Zion Williamson chapter. With a ton of leverage, the team should be exploring their options. If that means getting a chance to pair Zion with RJ Barrett to form a dynamic duo for the next decade, the team would be wise to at least entertain the idea.

Who knows if this is all just a smokescreen leading up to the NBA Draft or not, but with RJ Barrett openly talking about how he only wants to play for the New York Knicks, it’ll be interesting to see if he’d fall in love with New Orleans knowing his former college teammate and on of his best friends will be there. We knew this NBA offseason was going to be wild, but, we’re not even a week into it, and the rumors have been flying all over the place relating to trades, the draft and free agency.