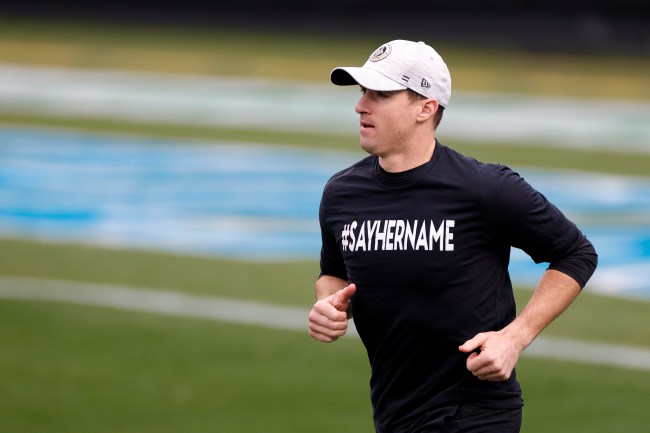 The New Orleans Saints were forced to delete a tweet of quarterback Drew Brees before Sunday’s NFC Wild Card matchup with the Chicago Bears after receiving some intense backlash on social media. The tweet that got deleted showed Brees warming up in a #SayHerName shirt which the team has been using all season to bring attention to the shooting death of Breonna Taylor by Louisville Police. The “Say Her Name”‘ hashtag has been used recently on social media after the death of US Capitol rioter Ashli Babbitt, who was shot while breaking into the Capitol building on Wednesday.

Considering Brees’ past support of President Trump fans believed he was referring to Babbitt when he wore the shirt.

They deleted lol it’s too late tho pic.twitter.com/7HQDVyVDXG

The Saints tried to explain why players were wearing the “say her name” shirts before deleting the tweet.

#SayHerName shirt is for the Saints Players Coalition initiative to amplify the voices and experiences of black women https://t.co/5cUVQhwJVP pic.twitter.com/CHB4erBV9f