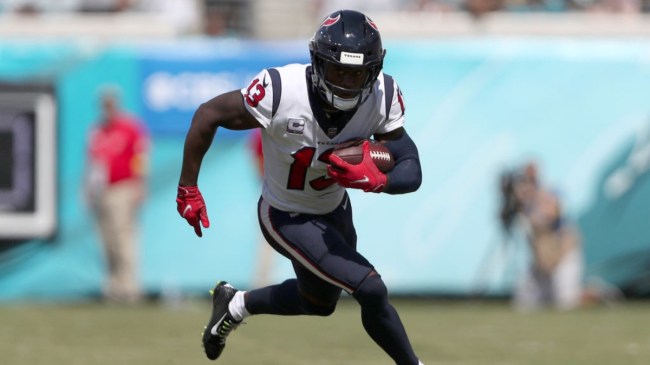 The New York Giants have plenty of things that have been working well for them this season. Their defense is currently only allowing 18.6 points per game and hasn’t allowed a team to score more than 23 points in a game through the first 5 weeks of the season.

Their offensive line is much improved after years of being one of the team’s weakest units.

Saquon Barkley has been the dominant running back the Giants were hoping they’d be able to lean on when they drafted him.

Daniel Jones has cut down his turnovers and managed games better than he has in his first 3 seasons.

Despite all of the positives, there is one unit that has been letting the Giants down this year. They’re receiving corps has been a mess this year. Kenny Golladay has not gotten any better after a brutal first season with the team and is now out injured.

Kadarius Toney has barely taken the field this season and currently has 0 receiving yards for the year.

Sterling Shepard was playing well to start the season, but is unfortunately out for the year.

Richie James flashed early in the year, but has cooled off the past few weeks.

Wan’Dale Robinson made 1 catch in Week 1 and hasn’t played since.

Despite the investment in the position from the Giants in recent years, this group is clearly holding them back right now.

There’s one analyst at ESPN that will tell you the Giants should be trying to tank right now, but in reality, they should be buying before the NFL trade deadline rolls around in a few weeks.

There’s one player that the Giants should be making a call about before that deadline comes around to fix their receiver issues. They should be calling the Houston Texans to find out about the avialability of Brandin Cooks.

Despite not getting the attention that some other top receivers do, Cooks has been one of the league’s most reliable pass catchers throughout his career. Cooks has topped 1000 yards in 6 of the past 7 seasons and would be exactly the reliable option Daniel Jones currently doesn’t have to target.

His contract also wouldn’t be prohibitive for the Giants this year as his cap hit sits just under $10 million.

Despite how well he’s played for them, the Houston Texans don’t have much reason to keep Cooks around the rest of the season. They are currently 1-3-1 and are a major longshot to make the playoffs.

They have young pass catchers in Nico Collins, Brevin Jordan, and even the recently signed Tyler Johnson who would benefit more from the playing time that Cooks would vacate. They’d also be able to secure some draft capital from the Giants to continue rebuilding their roster.

The Giants need help at receiver. The Texans have a talented one that they could benefit from trading. Joe Schoen should make this move happen before the deadline to give his team’s offense a boost and help Daniel Jones continue to improve as he tries to lead the Giants to their first playoff berth since 2016.