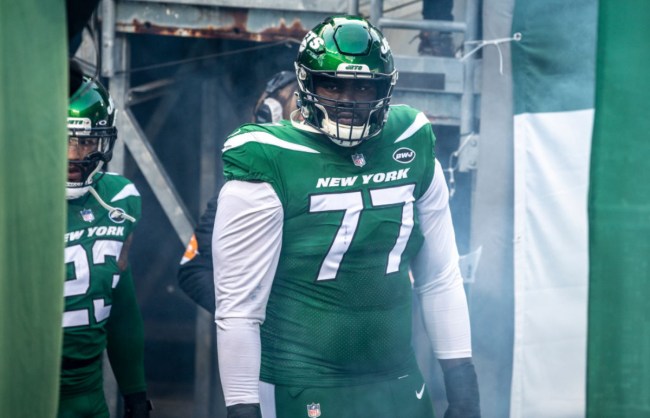 Mekhi Becton played just one game for the New York Jets a season ago, but could have a major impact on what the franchise decides to do during the 2022 NFL Draft.

The Jets selected Becton with the No. 11 pick in the 2020 draft. After playing in 14 games for the Jets as a rookie, Becton went down with a knee injury during Week 1 last season. The former Louisville standout underwent surgery but was expected to only miss 4-8 weeks and return to the field at some point during the season.

That never happened, Becton sat out the rest of the year. According to a report from ESPN’s Rich Cimini, Becton’s rehab process did not go too well as he put on roughly 40 pounds and weighed over 400 pounds at one point.

The new report about Becton’s weight issues comes just a couple of days after The Athletic’s Dane Brugler delivered some troubling news about the offensive lineman and his future as a Jet.

“I don’t think we talk enough about Mekhi Becton,” Brugler explained. “There are plenty of people around the league who believe that he’ll never put on a Jets jersey again. They think that ship has sailed.”

The NFL’s official website has Becton listed at 363 pounds, for what it’s worth.

The Jets were likely well-aware of Becton’s weight issues following his surgery, but with this now becoming public knowledge, many believe New York could be looking to draft a tackle with the fourth-overall pick.

This is the jets trying to make teams think they are taking a tackle at 4. Im not buying it.

Becton and Zion got the same nutritionist? https://t.co/WqL6HAV5Hj

He's trying to James Harden his way out of New York 😂😂😂 https://t.co/bw5wXIvAxs

Okay and? Dude was playing at mid 360s since he got in the league. Im fine with him playing anywhere between 360-385 tbh https://t.co/yQl6Pf0pxH