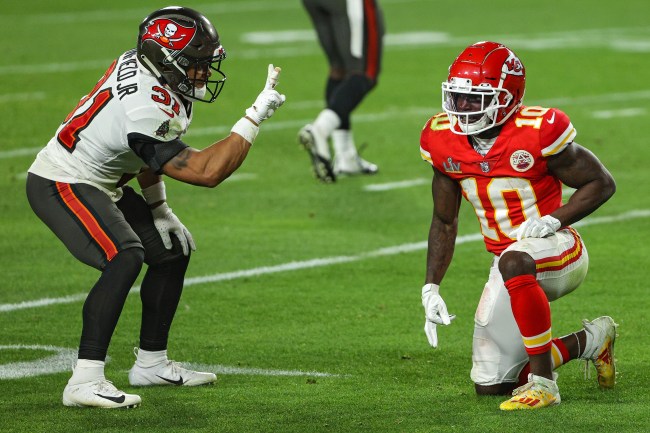 The No Fun League is at it again.

One of the lasting images from Super Bowl LV was that of Bucs Antoine Winfield Jr. holding up the peace sign to mock Tyreek Hill.

While speaking to the media Winfield explained that he was getting revenge on Hill for throwing up the peace sign at him during the Bucs-Chiefs week 12 game.

The taunting, man. It’s just something that I had to do. … He back-flipped in front of my face, gave me the peace sign. So it was only right that I gave him the peace sign right back to him. … It felt amazing to be able to do that, not even gonna lie.”

The NFL apparently didn’t find Winfield’s gesture and fined him nearly $8k for his actions.

Fans were obviously not happy with the fine.

The NFL continues to not get it… https://t.co/oGJhQhloJp

But Tyreek can get away with it? Smh 🤦‍♂️ https://t.co/8bcGPqjrKF

He got fined for something Tyreek does all the time without punishment??? Makes no sense at all https://t.co/lPaH0aT4AN

No Fun League back at it again! https://t.co/vnbt0DT8N5

Was Hill fined for throwing up the ✌️all year to DB’s and oh yeah back flipping into opposing team’s end zones? 🤔 https://t.co/k7PuqVSAlX