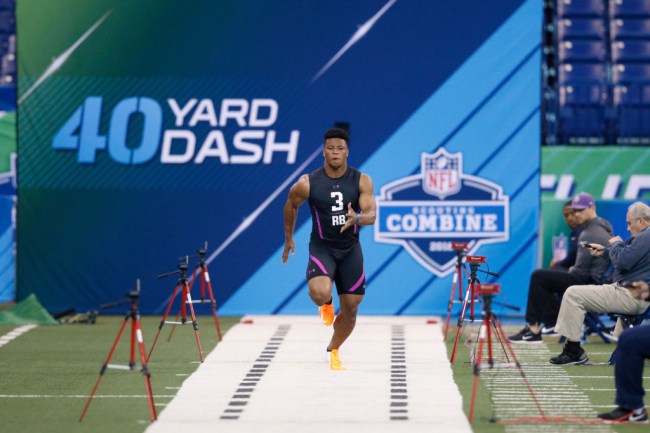 Saquon Barkley absolutely crushed the NFL combine this weekend. The former Penn State running back measured at 6’0″ feet tall, 233 pounds, and ran a 4.40-second 40-yard dash, did 29 reps in the bench press and had a 41-inch vertical leap all of which were all phenomenal numbers for his position.

Barkley’s performance at the combine was so impressive that he’s currently in the conversation to become the #1 overall draft pick according to NFL.com’s Ian Rapoport.

After days of evaluation at the #Combine, one thing is clear: Penn St RB Saquon Barkley is firmly in the mix at No. 1 for the #Browns, sources say. Would be the first RB at that spot since Ki-Jana Carter to the #Bengals in 1995.

One anonymous NFL assistant coach was so impressed with Barkley that he would go through insane lengths to draft the running back.

NFL assistant coach on Saquon Barkley: “I would punch myself in the nuts many, many, many times to be able to draft him.”

You know Barkley is special when a coach is willing to sacrifice his nuts to have a shot at drafting him. Hopefully the Browns are smart enough to pick him at #1 because it’s clear every team below them will immediately pick him up.