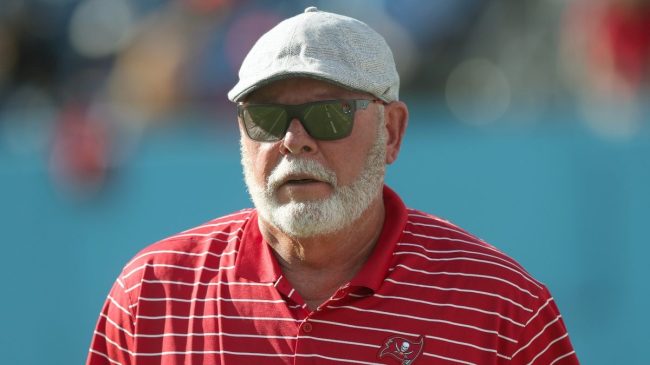 The aftermath of the wild fight between the Tampa Bay Buccaneers and the New Orleans Saints is finally calming down. Mike Evans was given a one-game suspension, while everyone else involved received no punishment. However, it sounds like the NFL investigated Bruce Arians involvement and have made a final decision regarding the former head coach.

NFL Sends Warning Letter To Bruce Arians And The Buccaneers

According to Pro Football Talk, “the NFL sent a warning letter to Arians and the Buccaneers in the aftermath of Sunday’s incident.” During the brawl, a video surfaced that appeared as though Bruce Arians was telling Mike Evans to get in the middle of the scrum. The league must have seen something they didn’t like, but it wasn’t enough to issue an official punishment.

It’s unclear what the letter says for now, as it was not released to the public. Even so, the team could “and Bruce Arians face potential discipline in the form of a fine or possibly even a banishment from the bench area,” per Pro Football Talk.

It is not likely the Buccaneers or Arians will face those punishments, as Pro Football Talk claims that a source tells them, “He’ll comply” in regards to Bruce Arians.

And with that, the NFL is likely looking to move on from the Bucs-Saints fight. Mike Evans is still appealing his suspension. However, it’s hard to imagine he wins that appeal. Tampa Bay will face the Green Bay Packers in Week 3. Hopefully, Bruce Arians stays in check this time around.