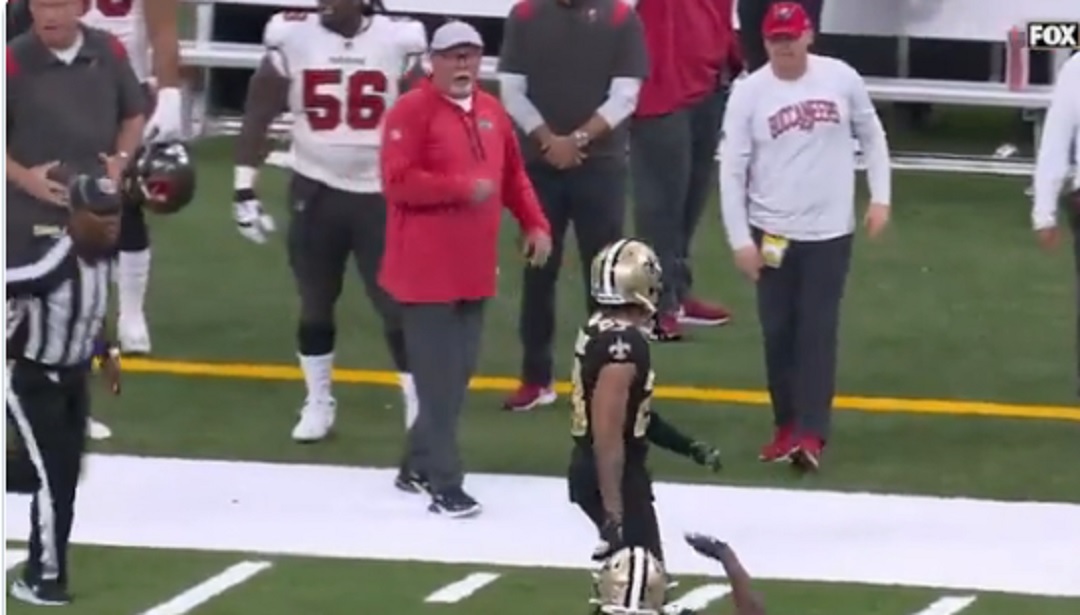 The NFL is looking into the fallout of the Saints-Bucs brawl, and retired former Bucs head coach Bruce Arians might find himself in trouble with the league.

On Sunday, Mike Evans and Marshon Lattimore were both ejected for their involvement in sparking the brawl, which started with Lattimore arguing with Tom Brady and ended with Evans shoving Lattimore to the ground.

One video circulating on the Internet appears to show Arians instructing Evans to go and protect Brady.

Another video shows Arians arguing with Lattimore before the brawl.

Marshon Lattimore and the Bucs sideline exchanged some words after the last play.

According to Mike Florio of Pro Football Talk, the NFL will investigate Arians’ involvement in the brawl and will decide whether or not to suspend Evans and Lattimore.

Per source, the NFL is working on addressing all things related to the Bucs-Saints brawl on Sunday, including the involvement of "retired" Tampa Bay coach Bruce Arians from the sideline.

Florio goes on to note that it’s unclear whether or not the NFL can prevent Arians from being on the sidelines in the future, considering he’s no longer the team’s head coach.

Conspicuously visible during Sunday’s fourth-quarter fracas between the Buccaneers and Saints was retired Tampa Bay coach Bruce Arians. The NFL may be taking a closer look at whether he’ll be allowed to roam so freely on the sidelines during games.

Even before the brawl that resulted in the ejection of Buccaneers receiver Mike Evans and Saints cornerback Marshon Lattimore, which featured Arians chirping and/or instigating from the sideline, Arians could be seen peppering one of the officials with questions and/or complaints.

Per a source with knowledge of the situation, the league office currently is working on addressing all things related to the incident, including sidelines. That specifically includes Arians.

It’s unclear whether the league can direct the Buccaneers to get Arians off the sideline, but it should. He’s no longer a member of the coaching staff. He should act accordingly.

On Monday, it was confirmed that Mike Evans would be suspended for one game as a result of the altercation. Given the state of their banged-up wide receiver core, the Bucs signed former Bills and Cowboys slot receiver Cole Beasley to a one-year deal.