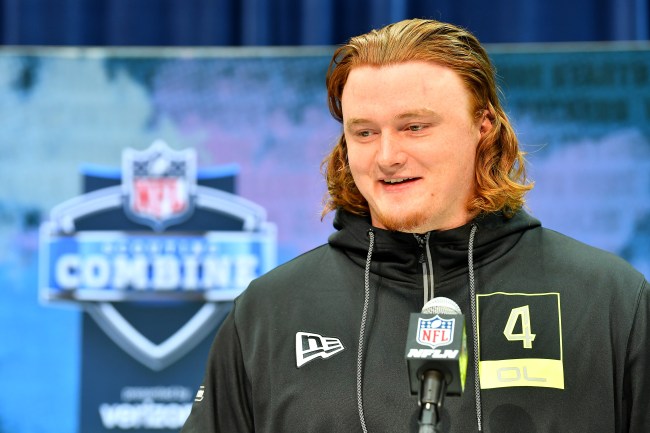 The annual NFL Combine’s taking place this week, meaning all the top prospects in the 2020 NFL Draft are showing off their skills for front offices of each team. Between all the measurements, drills, interviews and schmoozing that goes on each year in Indianapolis are wild stories about some of the prospects — which are always a fun way for fans to get to know some of the hopeful rookies.

As somebody who once went to the NFL Combine to run the 40-yard-dash — as an invitee for a media trip, not because I’m any good at football; other than the backyard variety, where I’m a fucking legend — I know firsthand about some of the stories that float around within those inner circles. It’s pretty wild to hear about the smokescreen teams show leading up to the draft, and how nearly every team being represented there just gets tanked together. It’s like the frat party of frat parties, all on the dime of a billionaire NFL owner.

While the Combine is fun AF to attend as a member of the media or employee of an NFL team, it’s a helluva lot more stressful as a participant. Just ask Ben Bartch, an offensive lineman prospect from a small D-II school called St. John’s University in Minnesota. Bartch, who stands 6’6″ and weighs 308 pounds, was an All-American in college, so he’s clearly got the size and skills to at least compete to win a roster spot on an NFL team.

However, Bartch didn’t start as a burly O-lineman in college, but, instead, as a tight end first. And, when asked about his transition from receiver/blocker to full-time quarterback protector, the kid didn’t mince words about what he did to pack on nearly 70 pounds of weight. In fact, he went into way too much detail — which may cause some gagging early this morning, because it’s nasty.

Describing the ingredients he dropped into a protein shake each day, Ben Bartch mixed together things like bananas, peanut butter and eggs, among other things. But just look at how he consumed all that, and see if you can hold your breakfast down.

Ben Bartch added 70 lbs moving to OT. One tool, a shake consumed at his job as a HS strength coach. Ingredients:

"Throw it all in and just plug my nose. I'd gag sometimes. But that's what you have to do"

Like I said above, just nasty, guys. Not really sure how somebody even thinks about doing that, but, hey, that’s why I’m not a hopeful pro athlete, I suppose.

Hey, the NFL Combine is a great place for teams to scout talent and see which players have the dedication to become an NFL player one day. And, if snorting shakes every day to pack on 70 pounds isn’t commitment, I don’t know what is. Here’s to hoping it all pays off for Ben Bartch and he gets a chance in the league, because this story’s too good (albeit gross), to just let evaporate into thin air after the Combine’s complete.