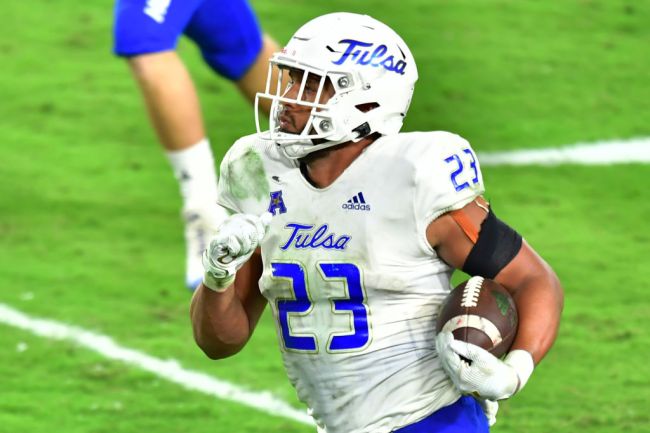 Every NFL team gives us a behind-the-scenes look at them making the call to the player they’re about to select in the NFL Draft these days, but even though we’ve seen these videos hundreds of times, it still never gets old.

This video of Tulsa linebacker Zaven Collins getting the call from Arizona Cardinals GM Steve Keim is the perfect example of why these videos are always entertaining.

Before Keim can even get a word in, Collins and his draft party go absolutely crazy for a few seconds before they finally quiet down so Keim can deliver the news that they’ll be drafting him with the 16th overall pick.

Keim jokes that he hadn’t even told him he was going to pick him yet, but it quickly settled in for Collins. It’s safe to say that he’s happy to be landing with Arizona as he immediately said “we’re going to f–king kill everyone” and that he’s ready to win a Super Bowl ring that’s so big “that a f–king show dog wouldn’t be able to jump over it.” It’s an odd statement, but hey, it works.

You will not watch a more amazing and emotional call than this.

Collins is a player that completely flew under the radar during his high school playing days despite being a standout while playing quarterback, linebacker, and safety at Hominy High School in Oklahoma. He elected to sign with Tulsa and redshirt his first year before winning the Chuck Bednarik award this past season as the nation’s top defensive player.