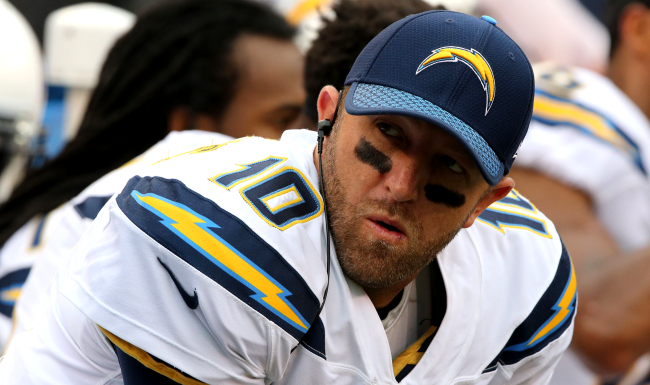 Just like back in 2004, there was another big trade announced Monday morning between the Los Angeles Chargers and the New York Giants. Unfortunately, unlike the swap that sent Eli Manning to New York and Philip Rivers to the Chargers, this one, it turns out, wasn’t real.

NFL Twitter was abuzz with news that the Chargers were trading a third-round pick (No. 77 overall) with their 13th selection in the first round to trade up two spots with the Giants, who hold the 11th pick overall.

Nobody is expecting much noise from the Chargers. They are one of the least interesting teams in the draft. That may have changed today as the team Twitter account appeared to accidentally tweet out a trade with the New York Giants in which L.A. would move up to No. 11 in exchange for No. 13 and a 2021 third-round pick. PFF tweeted out the below graphic with the caption “Posted and deleted by the Chargers *eye emojis*.”

If this were to happen, it’s a weird trade to make four days before the day of the event. Moving up two slots in the teens is for teams who see a player they really like falling and move up to take him. The Chargers have about as much of an idea as who will be there at No. 11 vs. No. 13 as the rest of us average Joes. It’s a pretty good deal for the Giants, who are rumored to be interested in trading down, but it feels like a trade agreed to in principal but won’t be executed until both teams know it’s what they want to do based on how the pieces fall on draft day.

Too bad this pic was made up by me and is completely unrelated to the Chargers. pic.twitter.com/iixwg1xic9

Posted and deleted by PFF 👀 pic.twitter.com/KT67zRJiZj

End of story, right? Well… not quite.

The man who claimed to have created the graphic, Max Merten – who has a whopping 206 followers on Twitter, never actually tweeted the original. So what’s going on here? He tried to explain… sort of.

I actually use them for a mock draft of mine, so it looks more realistic, but I thought I could also try and bamboozle some people.

It's not even a really good fake, damn it. Can you please retweet my Falcons fake instead?

But… how did the original tweet even appear on the internet in the first place?

According to Merten (I think), “I know a guy who works for PFF, trolled him, he sent it to the PFF chat, somehow it got to the PR department and they tweeted it.”

Needless to say, NFL Twitter had a lot of fun with this.

Not only did you get the internet to bite on a fake draft trade, you got it to bite on a Dave Gettelman trade back scenario. pic.twitter.com/OCV3oFJoyT