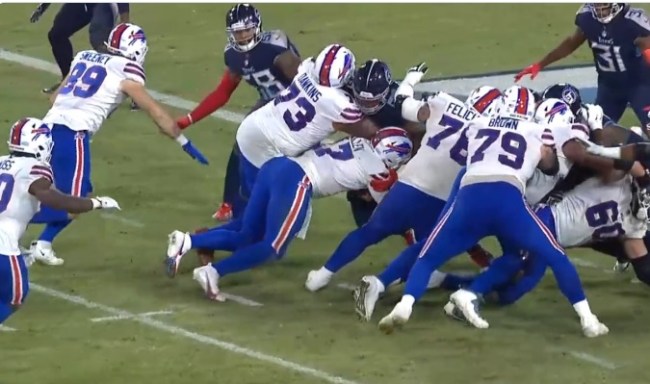 The Buffalo Bills lost in heartbreaking fashion on Monday night and fans are debating whether Sean McDermott made the right call at the end of the game.

Down three points with twenty-two seconds left in the game, the Bills decided to run a QB sneak on 4th-and-1 on the three-yard line instead of kicking a field goal to tie the game but unfortunately QB Josh Allen wasn’t able to convert the first down.

The Bills go for it on 4th down and the @Titans stop 'em! #Titans pic.twitter.com/1Uqz4mguSJ

Fans immediately debated whether the Bills made the right call on the play.

Some loved the call.

That was an awesome decision by Sean McDermott.

Just didn’t work out. That’s how it goes sometimes.

I love the call by Sean McDermott. It didn't produce what the Bills wanted but that kind of bold is what I'd want if I was a player.

Like the cojones on fourth down. Bills cower and kick a field goal last year. Gotta be able to get a few inches on a sneak.

Fully respect Sean McDermott’s decision here. You put the ball in the hands of your best player when you are trying to win.

Sometimes it just doesn’t work out. The line of thought was correct.

Others hated the call.

Is it riddick or griese who keep saying that was a good call by McDermott ?! Cuz it was not a good call … it was historically stupid

I can't believe Sean McDermott went for it on 4th down there with 12 seconds left instead of simply kicking the FG and sending the game to OT. Wow. #Loss

Why not kick the field goal????

That was a dumb move by the Bills. Even if they converted, that was still dumb.

What a bizarre decision from Sean McDermott. Couldn’t agree with that call any less.

Completely unnecessary gamble there and it cost Buffalo the game.