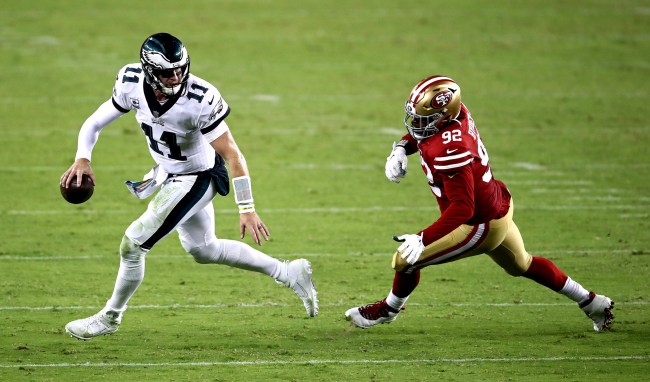 Here’s the good news if you are a fan of one of the teams in the NFC East after week four of the 2020 NFL season: your team still very much has a shot a winning the division.

The bad news is that it is because the Philadelphia Eagles with a 1-2-1 record are in first place in the NFC East (and they just got their first win of the season this weekend).

Combined, the Eagles, Football Team, Cowboys and Giants are an abysmal 3-12-1 so far this year.

So far this season, the four NFC East teams have been outscored by 125 points combined in four weeks, 336 to 461.

The Cowboys have given up 146 points in four games all by themselves (an average of 36.5 points per game). The 0-4 Jets are second worst at 131 points.

Dallas picked up their only win in week two, the Football Team got their lone victory so far in week one, and none of the NFC East teams won in week three (the Eagles tied with the last place 1-2-1 Bengals).

On the plus side for the NFC East teams, the Cowboys play the Giants in week five so at least one NFC East team will take home another W soon. (The Eagles play the Steelers and the Football Team plays the Rams so don’t expect more than one win again next weekend.)

Of course, every NFL fan just looooooves the Cowboys, Eagles, Giants and Football Team so they are all very worried about the state of the division.

Just kidding! Everyone outside of those fanbases hates those teams and fans across America are REVELING in the NFC East’s misfortune.

Looking at the NFC East standings this morning pic.twitter.com/hVDr4dBDRk

The NFC East drops to 1-11-1 this season in games outside of the division. pic.twitter.com/IYLUj4wjkQ

The Cowboys, Eagles, Washington and Giants trying to compete for an NFC East title pic.twitter.com/7HB10RmiXQ

The Eagles on top of the NFC East like pic.twitter.com/pVadJO1akQ

Who will win more games?

The @Eagles are 1st place in the NFC East despite running 3 plays all season while leading in the 4th quarter.

The Giants and Cowboys have yet to run any, and Washington ran 11, all in Week 1 vs the Eagles. pic.twitter.com/yxjwWRa02G

nfc east just shouldn’t be allowed in the playoffs