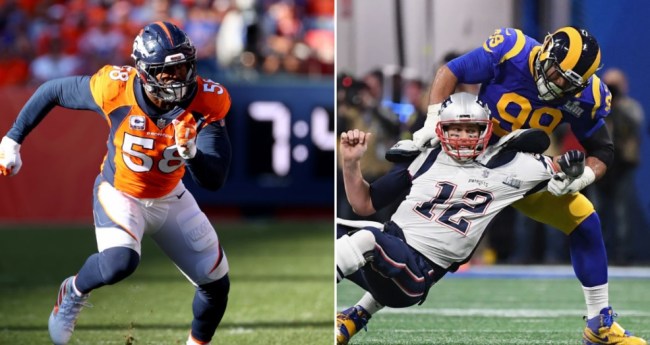 The LA Rams defense is about to get a hell of a whole lot scarier.

According to ESPN’s Adam Schefter, the Denver Broncos are finalizing a trade to send Pro Bowl linebacker Von Miller to the LA Rams in exchange for draft picks.

Miller is now saying his goodbyes to his friends in the Broncos’ training facility. pic.twitter.com/wJjlDOQkPU

Considering the Rams already boast one of the best defensive squads in the league, fans were stunned by the trade and are bracing for what’s coming.

Now they are teammates 😎 pic.twitter.com/LQfDo4BJX7

Kyler Murray seeing the Rams trade for Von Miller with a defense that already has Aaron Donald and Jalen Ramsey… pic.twitter.com/q2i8RW3CbM

Offenses realizing they have to face Jalen Ramsey, Aaron Donald, and Von Miller all at once pic.twitter.com/Y3dDey7hQe

The #Rams acquisition of Von Miller gives them the best exterior and interior pass rusher of this generation.

The Rams were already my favorite, but Von Miller + Aaron Donald = Rams playing the Super Bowl at home in LA!

Opposing QBs when they face the Rams now…😂