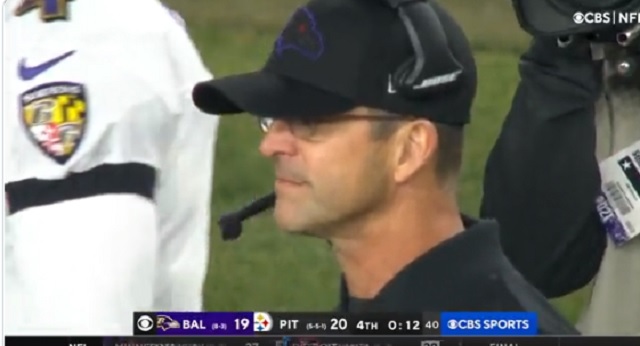 Ravens head coach John Harbaugh made a gutsy call that unfortunately didn’t pay off and will surely be debated on all the hot take shows on Monday.

The Ravens went for the win, but couldn't convert the two point conversion!

After the game, Harbaugh explained his decision while speaking to the media.

“Try to win the game right there.”

Coach Harbaugh on the decision to go for a two-point conversion. pic.twitter.com/CEc3tCDF1i

Fans immediately started debating whether Harbaugh made the right decision to go for two.

John Harbaugh plays too much Madden

Everyone is gonna be talking about John Harbaugh's decision to go for 2 instead a FG for OT. I don't hate the call. Ravens defense was falling apart in Q4 & Steelers were doing whatever they wanted. The offense was sluggish all day. Don't think Ravens had a better chance at a win

John Harbaugh goes for the win when he has Justin Tucker at his disposal in overtime.

Honestly, I love the guts from John Harbaugh.

If Andrews makes that play, you win. #BALvsPIT

Love the balls by John Harbaugh to go for 2 there. Always gotta believe in your guys to make the play and be willing to live or die with the results. I also had Steelers +4. That was awesome. What a game

Not many head coaches in the NFL would have the guts to go for all the glory in that scenario.