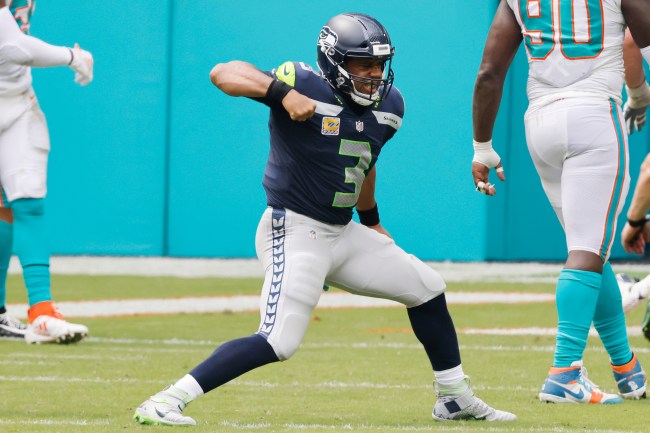 Week 8 of the NFL season coincided with Halloween, which always makes for a stranger weekend than most. So let’s just get right to this couple’s costume with Russell Wilson-Ciara dressed as Busta Rymes and Janet Jackson from their “What’s It Gonna Be” video.

👀 #RussellWilson and #Ciara dressed as #BustaRymes and #JanetJackson in their "What's it gonna Be" music video for #halloween 🎃 Thoughts? 🤔 📸 @ciara

I probably haven’t dressed up for Halloween in like seven years and that was for an office party where I basically had no choice, so I can’t relate to this kind of exorbitant effort but it’s safe to say they won the weekend.

MISSING IN ACTION: Gone this week were the Cardinals, Jaguars, Texans and The Washington Football Team. And no, it really doesn’t get any less ridiculous each time I have to type that name. Nonetheless, the absence of the Cards, Jags and Texans meant key components were missing in DeAndre Hopkins, 70s role model Gardner Minshew, and guys like Deshaun Watson. It also thankfully, meant no J.J. Watt, the doctor of style and king of charisma.

J.J. Watt gets a ton of heat here dripping with sarcasm and it’s usually — usually — well deserved. But his dog is freakin’ adorable and sometimes it’s good to be nice instead of the all that incessant mockery.

Anyway, considering we’ve now been driving this clown car for eight weeks, you should be able to recite the drill: Whether it’s fire, fierce, funny or FAIL, let’s get hop into this nonsense like 1989 Ric Flair.

NOTE: Tampa Tommy and the electric factory that is Daniel Jones, two mainstays for colossally different reasons, will be added at some point following their Monday Night Football game.

Let’s get to work.

The shades are back? ‘Twas about time. Going on to throw for 5 TDs was hardly a coincidence.

'It's unacceptable. I have to protect the ball better.'

This is probably the most dressed-down version of Cam Newton we’ve seen all season, on Halloween weekend no less. For mostly everyone else in the league and most of society for that matter, this would be considered an above and beyond effort. 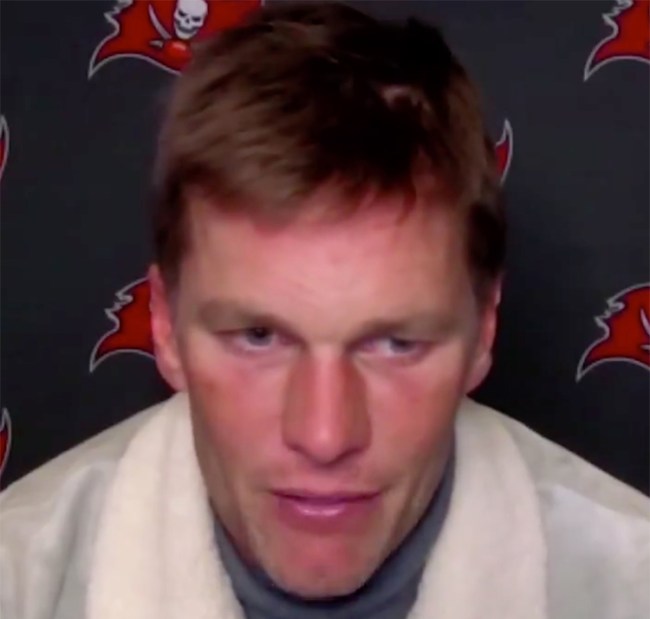 At this point, there have to be at least one or two Tom Brady stand-ins. Because he looks like a different person every week, if not every day. Above is TB12 after the game. Below is obviously Tampa Tommy mid-game. So unless his stylist is more indecisive and panicky than Carson Wentz attempting to scurry away from defenders, I’m pretty sure I’m right.

Tom will NOT be pleased when he sees this helmet hair shot pic.twitter.com/6RHkaaYMe7

For good measure, there’s also Wolverine Tom Brady, a trend that started last season and was seen again in Tampa as recently as this past week. Conspiracy!

RGIII managed to make a pretty alarming look come across as hilarious after he did that little shimmy at the end.

Do you feel like you cost the team the game tonight with those two picks?

"Those were costly mistakes" pic.twitter.com/Za1t8UjvJD

Daniel Jones is well on his way to setting the record for consecutive weeks of staring into everything and nothing. The QB situation for both New York teams is literally written all over their faces. Additionally, it’s kind of amusing that the Giant no longer post photos of “pregame Daniel Jones” because he refuses to stop dressing like he’s headed to Chemistry class.

Sam Darnold on the Jet offense:

"We just gotta play better in the second half" pic.twitter.com/iDzLl7A0j4

The infinite sadness of Jets’ postgame press conferences is getting supremely ridiculous. It’s like Sammy’s in the middle of explaining to the media that he can see dead people.

Sanchez! This shattered the “talk radio” 9.7 seconds of silence record from Friday. 😂 pic.twitter.com/bhrEkZfkoX

Bill is usually saved for the end with some kind of obnoxious comment about his outward misery. However, this “exchange” was so absurdly uncomfortable in just about every way, he had to be put near the top.

Am I blind? Maybe I’m blind or maybe it’s my computer or maybe it’s just the lighting because that’s either the lightest shade of pink in the world or that’s a tan suit. But regardless, that suit is pretty damn clean and Bobby Wagner is a genius. UPDATE: Nevermind, that is most certainly a pink suit. Carry on!

Back in our house. 🏡

Baker Mayfield has gone from a guy dressed up like an old-timey detective last season to somehow looking younger every week. Right here he’s basically a high school kid from Beverly Hills.

Now that’s the kind of spirit we’ve learned to expect when it comes to Halloween, Matty! Try and save some of the wildness for the rest for us, though, brother.

Lamar Jackson doesn’t allow a big loss to the Steelers to deter him from showcasing his unique stylings. His demeanor? Could use some work! And do he and Hollywood Brown ever separate? It’s seriously Halloween every week for this duo.

We can keep the rain check or we can make plans ☔️

S/o to the equipment managers pic.twitter.com/7bBo341SKr

Who ya gonna call? 👻🚫 pic.twitter.com/bJUkthkosY

Ghostbusters theme for the Vikings WR to go along with the cleats too. Now that’s the spirit. Adam Thielen really needs to help bring out the fun from Kirk going forward.

Ain't afraid of no ghosts 👻 pic.twitter.com/1Y32gt91NG

Like the headline states, shit got pretty weird out there. Steelers DB Mike Hilton carrying a Louis Vuitton bag while wearing that costume is freaking hilarious.

OK, this photo might just be a wee bit too closeup for comfort. Thankfully, Jarvis returned to the planet when he entered the stadium.

"The best time to wear a custom suit is all the time" 🎶 pic.twitter.com/4rOhpfLMJc

The Bengals finally got a win after being so close in just about every game and All Business Joey Burrow can finally breathe again. There was no chance this dude was showing up to the stadium in a Halloween costume even though the Bengals unis SCREAM Halloween. No shenanigans for Mr. Burrow.

Myles Garrett with another one of those amazing customized Frère tracksuits or jumpsuits or whatever the proper lingo is. None of that really matters though because its price point is probably out of your lane.

Don’t know a ton about Panthers running back Mike Davis but his last name rhymes with outrageous, making his PennyWise choice for a costume an ideal one. At the same time, I’d stay far away if saw this roaming through a parking lot. Some of Mike’s teammates definitely had to be just a little shook.

Vikings defensive back Ant Harris simply does not care about all of this Halloween chaos. He’d much prefer to be the recipient of ALL the fire emojis.

George Fant on what can be salvaged after an 0-8 start:

My goodness. Forget fashion. Someone give George Fant a hug as soon as heavenly possible.

On a very different Jets note, congrats to Avery Williamson for escaping a winless team for an undefeated team. Wearing full uniform with pads while pretending to hail a cab to Pittsburgh was genius.

Everything OK at home, Taco? Somewhat of an unsettling development on our hands here.

The fits are immaculate 💧

Mecole Hardman was a Georgia Bulldog so not sure what inspired the Cincinnati jersey. Going with AJ1s that have a matching color scheme looks sleek as hell though. UPDATE: I’m an idiot. A simple scroll to the right will tell you it’s a Travis Kelce jersey. The Chiefs are so loaded with talent and it’s so obvious all the big names genuinely like each other, which makes them an even scarier team than they already are.

As you can tell, lots of random players you don’t normally see highlights tend to come out of the woodwork for Halloween Weekend. This is pretty sensational. Can never go wrong with The Joker.

It doesn’t matter what holiday it is or what day of the week it is, Jamaal Williams is enjoyably weird every single day. A true treasure.

Do Dodgers hats even come in blue anymore or are they limited to only those who actually play for the Dodgers?

Some Dude On The Vikings

Going to the Vikings IG page for the pregame comments alone is usually worth the price of admission. Safe to say fans were not happy and lacking confidence in the boys going into Lambeau. And of course the one player featured in the craziest mask isn’t tagged in the photo. Inept execution!

Haven’t seen much of Dalvin Cook this season as compared to last, where he regularly updated his IG page, but couldn’t agree more with this tweet from the Vikings. Although, “a whole damn mood” would be the full, proper way of saying it. Sorry to nitpick, #VikingsSocial, however it’s not like we’re talking about an f-bomb.

This is a photo from late September and it’s the only slice of evidence we currently have that proves Aaron Jones owns other hats besides sombreros. Those Macho Man-style glasses are forever attached to his face though.