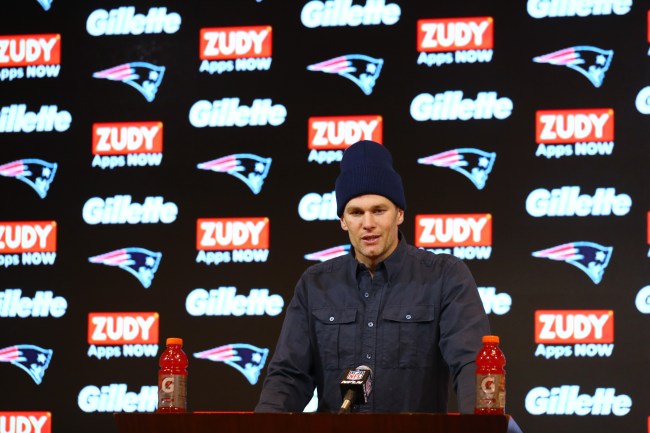 Really, Week 18 already? How on earth is it possible that the 18th week of this maniacal NFL season has come to fruition? Where oh f’ing where have these last 17 weeks gone?

Love it love it love it, — and also hate it — specifically the tragic fall of the beloved New England Patriots and Sir Thomas Brady. Kinda feels like yesterday, but it doesn’t. At all. WHAT A MOMENT. We’re just not used to seeing this.

But let’s get STRAIGHT to the point and discuss all the sizzle, drizzle, drippage, and scorching misfires we saw off the field, which is really what’s most important.

Yikes! I’m excited too, Bill. So, so petty after these losses. It’s become almost an endearing quality. Almost.

When you think you’re cool but you’re worlds apart. Feverish applause though for trying, Russ. I’m just not sure the Pat Riley slicked back look suits your personality. Although to be completely fair, Russ takes no days off when it comes to aviators. He hasn’t misfired once when it comes to shades.

#JulianEdelman locked in, going w/ the All Black look for gameday. 😤😤 #nflplayoffs via #patriots

Going with the all-black approach proved to be a fine choice for Julian Edelman. Symbolism at its absolute finest.

Is DeAndre wearing wrestling tights? Guess it doesn’t matter because there’s exactly one person in the NFL that can pull such a look and that’s DeAndre Hopkins.

I would rather be punted into a forgotten sea rather than watch Ryan Tannehill tear down the Patriots “dynasty.” Just outrageous. But to 100% sincere, I enjoyed every second of it.

Is it possible for Deshaun to miss? Like, ever? No. The answer is NO. He’s been on fire all season long.

QB Josh Allen: “This loss hurts. There are things that we should have executed better and that’s on me. This game is going to stick with me and it’ll only fuel me during the offseason.” #GoBills pic.twitter.com/ToSQS0LHZV

And there it is! Josh Allen will never not appear as though he’s facing 15-years-to-life.

Derrick Henry has just been on another level, quite easily living up to his nickname of King Henry each and every week. Dream season all around for the King.

It’s widely assumed that when Kenny Stills isn’t playing football he’s constantly sitting by a pool in South Beach along with a gaggle of women before hitting the club. Just a hunch.

This is the air of a gentleman who knows exactly what’s up. Like he knew the result of the game before even stepping on the field. Not sure the kicks work with the rest of the outfit but I’m not gonna be the one to tell him.

Just an embarrassing way to go out, though hilariously symbolic. Nice hat, dipshit. Sorry, but facts are facts and Conehead-style winter hats will never be considered “a thing” by anyone with a healthy set of eyeballs.

This is probably the most stylish J.J. Watt has ever looked. Only took him nine years! Better late never, I suppose.

Haven’t discussed Everson Griffen all year but he earned this one big time. The contest was basically over before it began. Lookin’ razor sharp.

It took everybody’s best for 60 minutes and then some.#GoGetIt https://t.co/wgYzJb9jnO

Whereas guys like Watson and D-Hop have been on fire all years, it’s been somewhat of the opposite direction for Kirk Cousins. This might be his best yet. Feel like he’s trolling at this point and doing one heck of a job.

Had I seen this photo prior to the game I would’ve bet the house on Minnesota. Also, his Instagram handle is “BigGoon98” so it was a must for his inclusion. NOTE: Scroll left for a photo of an electric Stefon Diggs.

This getup is all OVER the place, basically saying “I can buy stuff… so I bought stuff.” Those pants have officially been canceled for 2020.

This might be the first instance where I’m not completely mocking the short pants look. Kyle Rudolph pulled it off in this case.

Smart move to take your mind off things and head to a Sixers game. Although Josh McCown looks like he just saw someone kick a puppy or he himself kicked a puppy. Meanwhile, Zack Ertz appears to be having the time of his life. Must be wearing a brand new jacket or something.

On a more positive note, gonna finish this one out with the lovable Teddy Bridgewater, who by all accounts is one of the nicest guys in the entire league. He’s always come across as a kid at heart, so the bicycle couldn’t be more fitting.