One NFL GM Has Reportedly ‘Checked In’ On Odell Beckham Jr 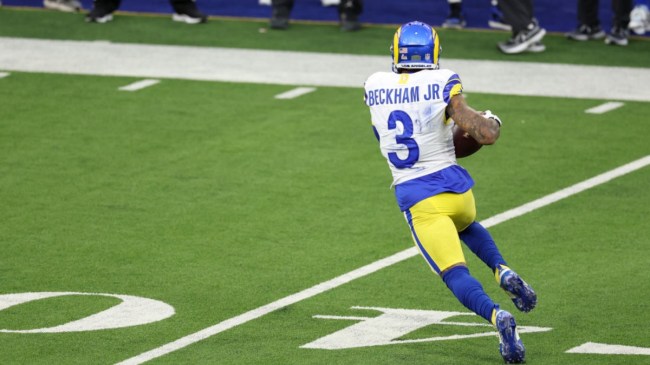 The NFL regular season is less than a week away and Odell Beckham Jr still isn’t on an NFL roster.

There have been plenty of rumors linking Odell to multiple teams, but no team has actually pulled the trigger yet.

However, it seems interest from one team has persisted. Buffalo Bills GM revealed to the media that he had “checked in” on Odell Beckham Jr during his recovery from his ACL injury.

He’s recovering like Tre from an ACL. He’s a talented player. Show me a talented player I’m not checking into. I’m always going to do that, whether that’s a trade for someone or letting a guy get healthy. Again, the cap factors into it too.

Interest from the Buffalo Bills in Odell is nothing new. Von Miller has been actively recruiting him throughout the offseason.

However, teams have seemed reluctant to bring him in until he is recovered from the knee injury he suffered in the Super Bowl.

The Bills aren’t a team that stands out as necessarily needing Odell Beckham Jr with Stefon Diggs and Gabriel Davis currently set to be the team’s starters and Isaiah McKenzie, Jamison Crowder, and Khalil Shakir all also fighting for targets.

Similar concerns last season didn’t stop him from fitting in with the Rams. The eventual champions already had Cooper Kupp, Robert Woods, and Van Jefferson. Still, he found his way onto their roster and played a big role in their playoff run.

Maybe he’ll find his way to another Super Bowl contender in the middle of the season again this season.