NFL Insider Goes Out On A Limb, Says Tom Brady And Baker Mayfield Are ‘Locks To Play Better’ In 2020 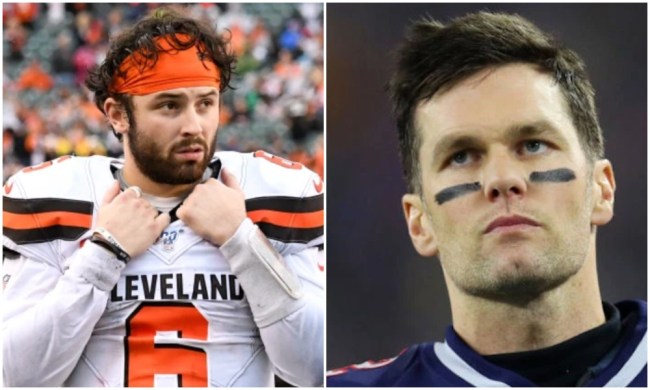 Each and every NFL offseason there are those groups of ‘prime breakout’ or ‘destined for a comeback season’ players and with the fact that it is indeed list season, there’s no better time to look at some guys that could burst onto the scene in 2020.

Usually, these lists truly are full of under-the-radar guys that maybe don’t get a lot of love, or maybe they’re coming off of an injury-filled campaign. That’s not the case when it comes to NFL analyst Gil Brandt’s list, he’s got Baker Mayfield and a guy named Tom Brady among his ‘locks to play better in 2020.’

Mayfield still plays for the Cleveland Browns, so his name is going to be on this sort of list until he and that franchise actually prove the world wrong. Brady’s biggest rival this upcoming season is going to be Father Time, who last time I checked was undefeated, but TB 12 is joining a Tampa Bay team absolutely loaded with offensive weapons. Saying Brady is in store for a ‘better’ season in 2020 is like saying water will be wet tomorrow, at least when you look at things on paper.

Mayfield came in at No. 2 on Brandt’s list while Brady was No. 3; JuJu Smith-Schuster took the top spot.

The strongest argument one could make to justify Mayfield and Brady to actually headline a list like this is the fact that they both will face the challenge of leading their teams to the playoffs that just so happen to be in the longest postseason droughts in the league.

Related: The Browns Get Dumped On By Twitter After Announcing A Fan Can Make A Bid To Call First 15 Plays During Preseason Game