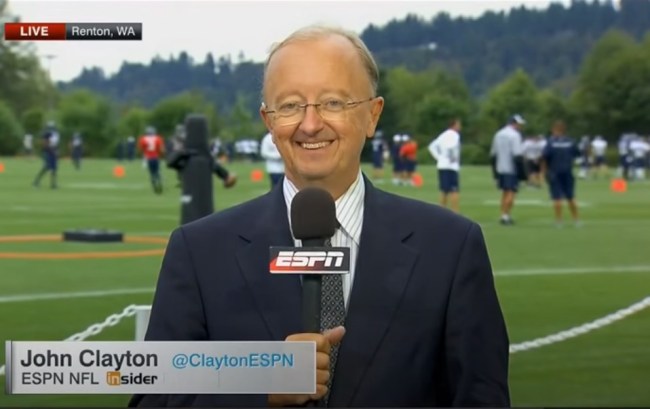 After tweeting about his radio show performance this morning, Clayton randomly tweeted out the letter Q which led to some questions from his followers.

The letter Q has been attributed to the Qanon conspiracy theory that accuses several prominent politicians and celebrities of being pedophiles who are secretly controlling the world. Clayton acknowledged his Tweet was a mistake but NFL fans still had plenty of jokes.

By the way the q tweet was my ear touching the q bottom on the iPhone. Latest update has phone answer at the top of the phone and not over the whole screen. I was on the phone not tweeting

man if this was a pocket tweet that’s a really unfortunate key to have hit https://t.co/Qx6sz68AYt

Of all the letters he could accidentally tweet, this has to be the most conspiracy-theory inducing. https://t.co/OkStcx2Mb5

John Clayton hearing reports from sources inside the Jets training facility that the democrat cabal has captured Sam Darnold https://t.co/foWDLrqal7

The professor has spoken https://t.co/A1CGRHaYfz

John Clayton being Q would be the most 2020 thing ever https://t.co/d3cVVsgB9Y