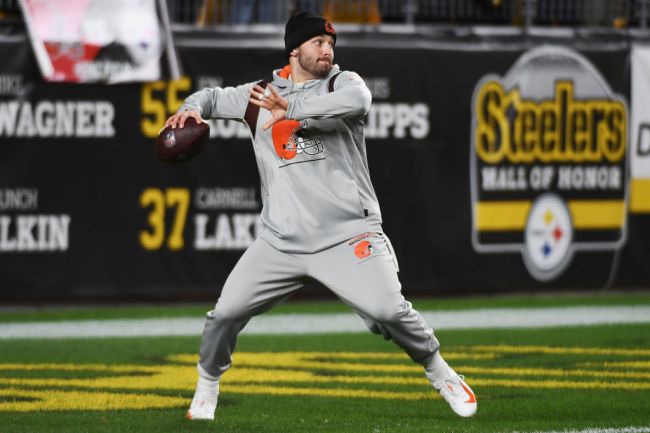 Deshaun Watson was introduced today as the new quarterback of the Cleveland Browns. Unfortunately for the Browns, they are still dealing with the issue of what to do with their old quarterback.

It has been a week since the football world learned that Deshaun Watson would be joining the Cleveland Browns, but the team doesn’t seem to have gotten any closer to actually trading Baker Mayfield in that week.

At first, it seemed likely Mayfield would end up as a Colt, but they weren’t interested. Then the Falcons and Saints filled their vacancies at QB. It leaves Mayfield without many potential destinations where he could be a started and has cratered his trade value, to the point the Browns aren’t even looking to get a first round pick for him.

The Browns’ difficulty in trading Mayfield has also now opened up one wild possibility that was laid out by Pro Football Talk’s Mike Florio.

By failing to trade Baker Mayfield before trading for Deshaun Watson, the Browns may end up having to cut Mayfield — and then watch him make a beeline for Pittsburgh. https://t.co/sBfAgoI9xG

Basically, the idea is that if the Browns can’t find a team that wants Mayfield and that Mayfield wants to play for, they’ll eventually have to cut him rather than keep him on the roster and end up paying his full salary of nearly $19 million.

Doing this would open up one option for Mayfield that is absolutely not in play for him as long as the Browns control where he is traded. He could join their AFC North rivals, the Pittsburgh Steelers.

The move would give Mayfield the opportunity to compete with Mitch Trubisky for the starting QB job in Pittsburgh and more importantly, 2 chances at revenge every season.

If the Pittsburgh Steelers with Mayfield were able to make playoff appearances over the Browns, it would be a nightmare to watch for Browns fans and a dream for Mayfield, who has never really gotten the appreciation he hoped for in Cleveland. That situation could become a reality soon.