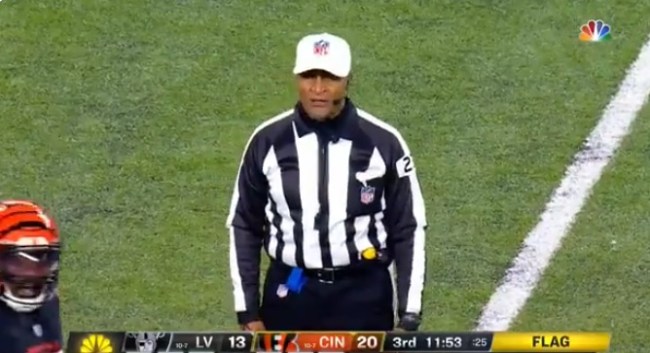 Veteran NFL referee Jerome Boger is having a rough night during the Bengals-Raiders playoff game.

Boger, who was named the lead official for the Bengals-Raiders game, clearly screwed up when he allowed a Bengals TD after someone on his crew had blown their whistle before the conclusion of the play.

The NFL will apparently acknowledge Boger’s screw-up after the Bengals-Raiders game ends.

Per @miketirico: the NFL will be issuing a statement after the game about the Bengals’ touchdown in which a whistle was blown but the scored stood.

Boger’s name began trending on social media after fans are calling for the league to fire him over his crucial error on Saturday night.

I have no idea why Jerome Boger is reffing a playoff game.

I don’t know how the NFL can expect us to assume integrity in a playoff game when you send Jerome Boger, consistently the worst ref in the league, to officiate it.

Jerome Boger is an embarrassment. To run him out in a playoff game is such an FU to all of us. Just a major joke. Clown show

Missed call by Jerome Boger's crew drastically altering the outcome of a game? You don't say.

This isn’t the first time Jerome Boger’s crew struggled with knowing the rules of a touchdown… pic.twitter.com/Fhymwp88Lv

Jerome Boger’s crew just blew a whistle on the Burrow TD, which should have killed the play.

Don’t ever let Jerome Boger and his crew ref a game. Roughing the passer??? pic.twitter.com/4y9LSH67Uy

This text, by the way, came like three eff ups ago. https://t.co/xdYw6OGE1v