The NFL Destroys The NBA Finals In Ratings, Vikings-Seahawks Had Twice As Many Viewers As Heat-Lakers Game 6 On Sunday 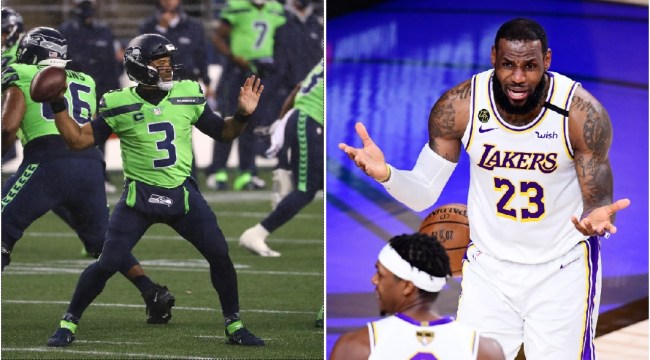 The NBA has had a rough few weeks in the ratings department and it didn’t go well when they had to go head-to-head with the NFL.

On Sunday night game 6 of the NBA finals between the Heat and the Lakers faced off with the Vikings-Seahawks game and got absolutely crushed in the ratings.

the Lakers beat the Miami Heat in Game 6 of the NBA Finals to win the franchise’s 17th championship. The game on ABC delivered a 2.1 rating in the 18-49 demographic while 5.60 million viewers watched the Lakers’ 106-93 victory in the bubble in Orlando.

The game matched a demo high in early Nielsen Live+Same Day ratings for the series and was even with Game 5. It had competition from NBC’s Sunday Night Football (3.2, 11.42M), which always dominates the night during the regular NFL season.

The NBA’s ratings have absolutely plummeted after having to move their playoffs into the fall due to the coronavirus. Last year’s NBA Finals Game 6 between the Golden State Warriors and Toronto Raptors delivered 18.34 million viewers compared to the 5.64 this year’s brought in.

It is worth noting that the NBA isn’t the only sports league to suffer from a ratings decline during the Coronavirus pandemic. Nearly every sports league other than the NFL is seeing all-time lows in viewership this fall.

All of them May and June events moved to August and September.