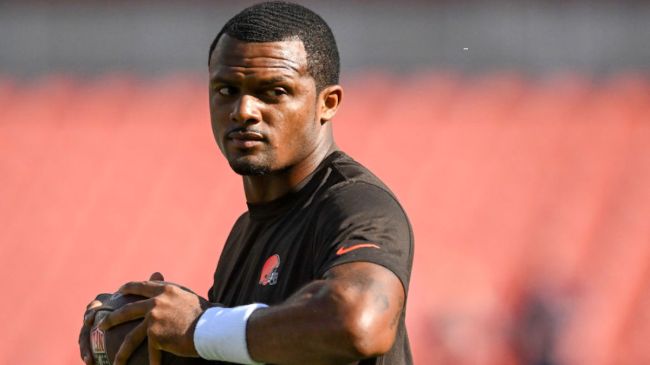 After months of back-and-forth, controversial Cleveland Browns quarterback Deshaun Watson and the National Football League came to an agreement on Watson’s punishment for his multiple sexual misconduct lawsuits (24, to be exact): an 11-game suspension and a $5 million fine.

Prior to the official announcement of Watson’s punishment, reports had indicated that NFL commissioner Roger Goodell was looking to suspend Watson for a period of “at least” one year. Ultimately, though, Watson’s suspension isn’t even three-quarters of a season long, and a new report indicates that the other NFL owners may have had something to do with that.

According to NFL reporter Peter King, “multiple owners who didn’t want Deshaun Watson suspended for the season, and told Roger Goodell that.”

The way NFL contracts work is if a player doesn’t play in a season because he either chooses to sit out or is suspended for the year, the contract “tolls,’’ or is pushed back one season. Watson, of course, was suspended 11 games and fined $5 million on sexual-offense charges. [via ProFootballTalk]

As things currently stand, Watson will return and theoretically start his first game for the Cleveland Browns when they take on the Houston Texans, his former team, during Week 13. Ironically enough, the Browns — without the services of Watson — will open their 2022 season against the Carolina Panthers, who recently named Baker Mayfield their starting quarterback after acquiring him in a trade with Cleveland.

RELATED: NFL Fans Stay Woke, Realize How Strange It Is That Deshaun Watson’s 11-Game Suspension Times Up Perfectly With The Browns Vs. Texans Game