NFL Fans Stay Woke, Realize How Strange It Is That Deshaun Watson’s 11-Game Suspension Times Up Perfectly With The Browns Vs. Texans Game 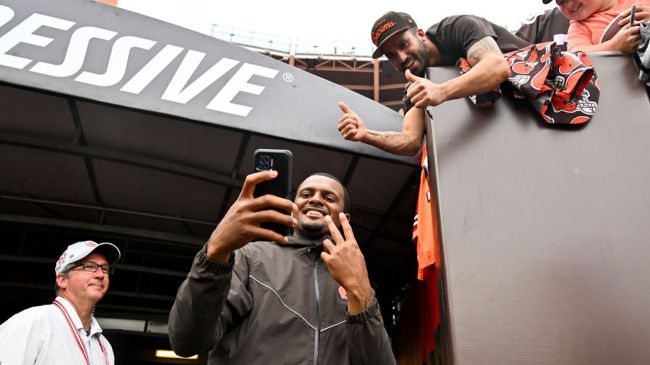 Last week, it was announced that after years of back-and-forth, the NFL and embattled quarterback Deshaun Watson — who had been accused of sexual misconduct by a whopping 24 women — had come to an agreement on the quarterback’s punishment.

As a result of the controversies surrounding him, Watson was handed an 11-game suspension and a $5 million fine. While a majority of NFL fans — even the NFL itself wanted to suspend Watson for “at least” a full year — seemed to feel the punishment was quite light (especially when compared to some suspensions the league has dolled out for weed use), others noticed how strange it was that Watson was handed an 11-game suspension, which is an odd number for a league that usually suspends players for an even amount of games.

The conspiracy theories were then turned up to 11 (pun intended) when fans realized that, because the Browns have a Week 9 bye week, that means Watson is currently on course to make his Cleveland debut in Week 13 against none other than the Houston Texans, his former employers and the team that drafted him.

Deshaun Watson is being suspended for eleven games and a $5 million dollar settlement.

He'll be returning against… oh come on.

The NFL is doing this shit on purpose. pic.twitter.com/Rl56VaDkv4

Perhaps making NFL scheduling conspiracy theorists even more up-in-arms is the fact that the Cleveland Browns — who will be quarterbacked by journeyman Jacoby Brissett due to Watson’s suspension — will begin their 2022 season against the Carolina Panthers, which is the team they shipped Baker Mayfield too after controversially acquiring Watson and signing him to a fully-guaranteed five-year, $230 million deal.