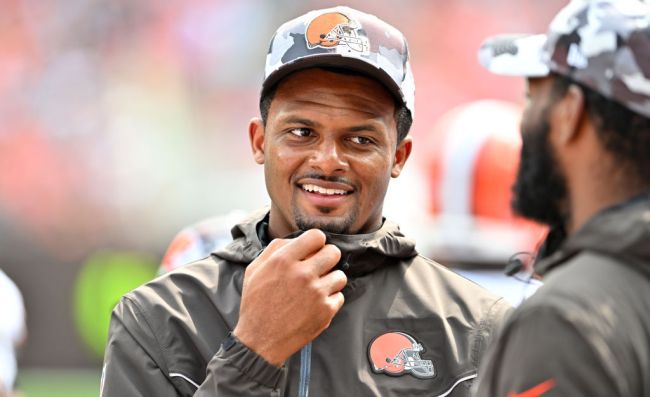 With Deshaun Watson’s punishment for his alleged sexual misconduct now official — 11-game suspension and a $5 million fine — the Cleveland Browns organization can now begin to move forward with the 26-year-old as their franchise quarterback. And based on the reception Watson has received from some fans, Browns nation seems prepared to welcome the controversial signal caller with open arms.

A Cleveland Browns fan was spotted selling a “B***h, give me a massage” t-shirt

Over the weekend at the Browns preseason game against the Philadelphia Eagles, one fan was spotted selling wildly offensive Deshaun Watson-themed t-shirts that said “B***h, give me a massage” on them. This is an obvious reference to Watson’s many alleged encounters with massage therapists over the last few years — according to a report from the New York Times, Watson apparently met with 66 different massage therapists over the course of 17 months.

Granted, while the apparel is not officially licensed by the league or the team, its sale just speaks to how some people within the Browns’ fanbase view Watson. The 26-year-old will likely need the support of his home fans in the coming years, because if the Jacksonville Jaguars game from a few weeks ago is any indication, Watson is going to be heckled, jeered, and booed while playing on the road for the rest of his career.

With Watson sidelined until Week 13 when the Browns take on the Texans (Watson’s former employers), the team will be turning to journeyman Jacoby Brissett as their starter. Ironically enough, the Browns’ first game of the season is against Baker Mayfield — the QB they shipped out of town when they acquired Watson — and the Carolina Panthers.

RELATED: The Lone Holdout Of The Deshaun Watson Lawsuit Explains Why She Isn’t Going To Settle