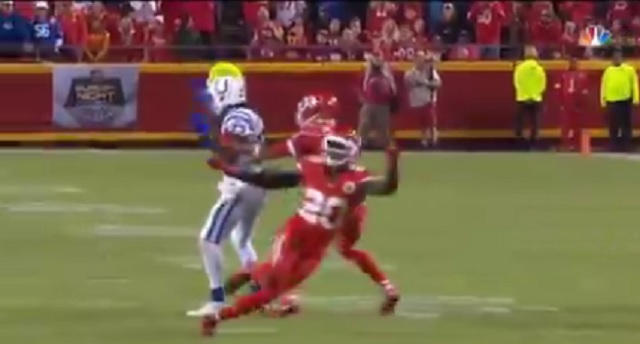 After the New Orleans Saints were robbed of a chance to go to the Super Bowl because NFL referees missed an obvious pass interference penalty at a crucial point in the NFC championship game, the NFL decided to implement a new pass interference replay review system to prevent such an egregious error from happening in the future.

The new replay rule gives coaches the ability to challenge offensive and defensive pass interference penalties in the first 28 minutes of each half, with the final two minutes subject to booth review.

Unfortunately, the NFL has done a poor job this season of overturning calls on the field and a play during Sunday night’s Chiefs-Colts game displayed their inability to fix pass interference.

In the fourth quarter of tonight’s ‘Sunday Night Football’ game, Colts wide receiver T.Y. Hilton was called for offensive pass interference after a defender ran into him more than one yard outside of the line of scrimmage.

Colts head coach Frank Reich challenged the call on the field and it was somehow not overturned much to the shock of NFL fans who watched the replay.

Challenging pass interference calls is stupid because they aren’t changing any of them. That OPI call was awful and clearly so on replay and yet it wasn’t overturned. What’s the point?

NFL to Fans: “You can now challenge pass interference”

NFL to NFL: “Ha, there’s nothing we are going to do. We will pretend to watch the replay, and keep the original call. Every time.”

Nah the NFL is actually annoying. IF THAT PLAY DOESNT GET OVERTURNED BY REPLAY FOR PASS INTERFERENCE WHAT WILL?!! #SundayNightFootball #KCvsIND

"Remember when everyone was mad about not knowing what a catch is?"

"Yeah that was awesome."

"Let's do it again but for pass interference."

The new pass interference replay review system is broken and the NFL needs to fix it.