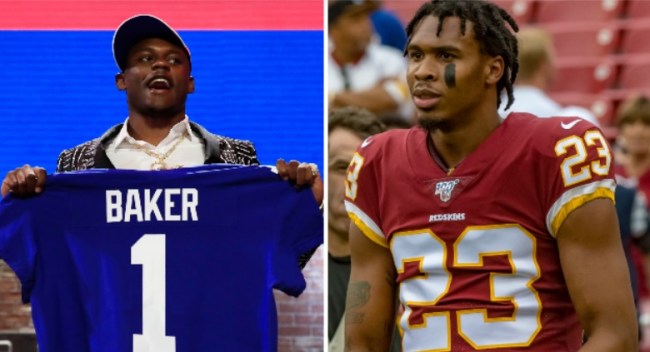 New York Giants cornerback DeAndre Baker and Seattle Seahawks corner Quinton Dunbar may have gotten themselves in more than trouble than they are already in.

Back in May, the two players were charged with four counts of armed robbery and four counts of aggravated assault with a firearm after allegedly robbing several people at a party.

Baker’s lawyer Michael Grieco would go on to say that his client was innocent after the victims of the case changed their stories.

Grieco said that outside of a lone independent witness whose story has remained consistent that Dunbar wasn’t involved in a robbery, the four alleged victims of the robbery have all signed sworn affidavits contradicting their initial claims to police that they were robbed by Dunbar and Baker. Grieco added that whether he’s being told the truth now or not, the claims don’t stand up to scrutiny.

On Friday, New York Daily News’ Pat Leonard is reporting that the Miramar police department has an abundance of evidence showing that the victims were paid $55k by Baker and Dunbar to recant their stories.

Detective Mark Moretti of the Miramar Police Department, who submitted the warrant reviewed by Judge Marina Garcia Wood, also reveals alarming direct messages between Baker and Johnson on Instagram that implicate Baker in the payoff.

One of the four victims says “he was being directed that he didn’t see what he thought he saw” on the night of the alleged armed robbery, the warrant states. And the victim who received $5,000 said Grieco walked back into the office “just after the transaction had occurred” and said “there is no way he (Grieco) could not have seen this transaction.”

Police say they have security cam footage of how the payoff went down.

CCTV video evidence shows Grieco, Johnson, an unknown individual, and the four alleged victims at the attorney’s office on May 15 appearing to make the payoff.

This new warrant says that in the video, Grieco is seen leaving his 24th floor office, taking the elevator to the lobby, and bringing Johnson and the four alleged victims back to his office at 2:26 p.m.

Johnson eventually leaves the office and meets an unknown person in the lobby, according to the warrant. And then Johnson and the unknown person take the elevator up from the lobby at 2:34 p.m.

During that elevator ride, the unknown person removes a “black bag” from his shoulders, “opens it and removes money.” The person also “shows the open bag to Johnson and you can see a large quantity of money. Johnson then takes the bag,” the warrant reads.

Then everyone meets in front of Grieco’s office before going inside. By 3:15 p.m., everyone has left the building. And at approximately 4 p.m., Moretti says he received notification from Grieco indicating there had been a change in testimony from the victims and witness.

According to Leonard, the Giants are ready to part way with Baker following the payoff allegations.

AND NOW MORE BREAKING NEWS: Unnamed team sources, asked for comment on our breaking news, tell me they would not expect DeAndre Baker to remain on the #Giants roster much longer.” There is it. #nfl @NYDNSports https://t.co/ObUQzm03rz