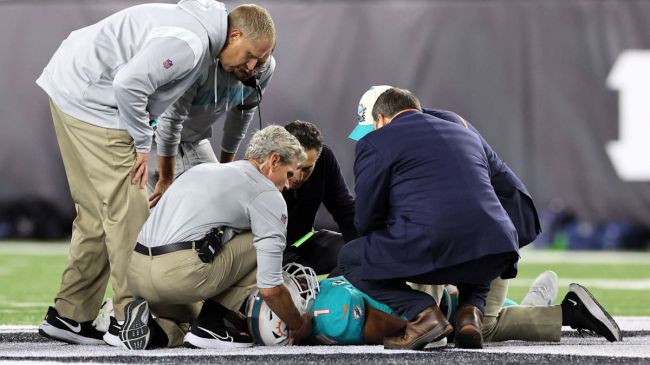 During the Week 4 Thursday Night Football game between the Miami Dolphins and Cincinnati Bengals, third-year Dolphins quarterback Tua Tagovailoa was knocked out of the game during the second quarter with a reported head/neck injury.

In a scary scene, Tagovailoa laid on the turf for almost ten minutes before being eventually stabilized and carted off the field. The 24-year-old was then taken to the University of Cincinnati Medical Center and has since been discharged, which is great news.

The injury to Tua is going to result in tons of questions being asked of both the Dolphins and the NFL, as the QB appeared to suffer a concussion in Sunday’s game against the Bills but still returned to the game anyway. In the aftermath, both Tua and the team claimed his injury was related to his back despite everyone seeing him clearly wobble in a dazed fashion following the hit.

After seeing Tua get undeniably knocked unconscious this time, the NFL world of both past and current players took to Twitter to react to the injury, share their best wishes to the QB, and to flame the NFL for even letting him play.

“That’s a serious injury. Tua shouldn’t have been out there with Sunday Thursday turn around. Sometimes players need protecting from themselves. Dolphins failed Tua,” said Hall of Famer Shannon Sharpe.

That’s a serious injury . Tua shouldn’t have been out there with Sunday Thursday turn around. Sometimes players need protecting from themselves. Dolphins failed Tua

Prayers up for you my boii 🙏🏾

🙏🏽🙏🏽🙏🏽 for tua. May god be with you and hopefully okay. The staff in UC hospital do a great job with care. Your in great hands. #DolphinsvsBengals

“Pulling for Tua, scary as hell. I hope I’m being overly cynical but I think shit just got real for the dolphins. This is going to play out loudly,” said former defensive end Chris Long.

Pulling for Tua, scary as hell. I hope I’m being overly cynical but I think shit just got real for the dolphins. This is going to play out loudly.

Former Washington QB and current ESPN analyst Robert Griffin III said the NFL will “have to answer for this”:

Tua 4 days ago. The Dolphins will have to answer for this. https://t.co/DlNIVMPZmC

Cardinals defensive end, like many NFL fans, wondered why Prime Video and the NFL kept showing the replay of the hit:

“For me, as long as I’m coaching here, I’m not going to fudge that,” McDaniel told reporters. “If there’s any inclination that a person has a concussion, they go into the protocol and it’s very strict. As long as I’m the head coach that will never be an issue to worry about.”

Despite McDaniel’s assertions, questions of the organization are going to be asked in the coming days and weeks.

RELATED: Concussion Specialist Said Tua Tagovailoa Playing Tonight Would Be A ‘Massive Step Back’ For NFL Hours Prior To Scary Injury