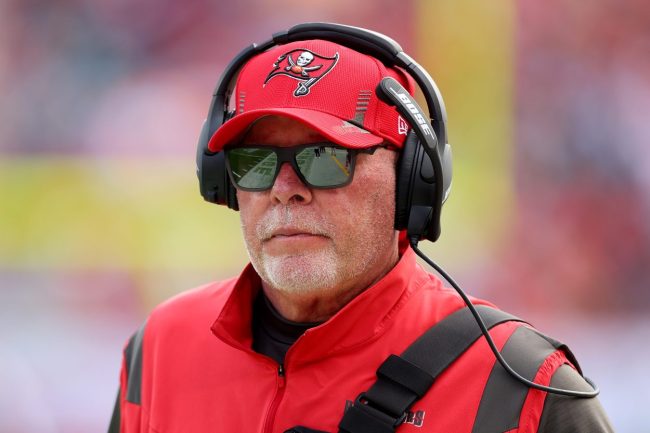 Wednesday night provided the NFL world with quite the shock.

Tampa Bay Bucs head coach Bruce Arians has announced his retirement as he pursues a position in the team’s front office. Defensive coordinator Todd Bowles will fill in as his immediate replacement.

Defensive coordinator Todd Bowles picked to replace him. Staff being told the news at this hour.

Arians has roamed the sidelines in Tampa for the last three seasons, leading the Buccaneers to a Super Bowl title in 2020. Last year, his team posted a 13-4 regular season record before falling to the Rams in the NFC Championship Game.

As a head coach, Arians went 80-48-1 over eight seasons with the Cardinals and Bucs. Now, he passes the keys to Bowles, who’s been a head coach before with the Jets.

The news came as quite the shock to the NFL world. Almost as surprising as when his QB Tom Brady hung up the cleats before returning to the team two months later.

As expected, the news of Bruce Arians’ retirement sent shockwaves throughout the NFL. Many are looking back on the accomplishment of the head coach while others are wondering just how this will affect the Buccaneers moving forward.

And was Tom Brady involved in the move?

Take a look at the immediate reaction on social media below.

Bruce Arians is transitioning to the front office as our Senior Football Consultant. Todd Bowles has been named head coach.

Bruce Arians’ dream has been to pass it on to one of his assistants when the team was in great shape. Now, Todd Bowles will run the show. https://t.co/MqD5LvW8X8

I’m pretty sure we talked about this right? It was pretty clear Arians had to step aside for Brady to come back. https://t.co/EH0uyOX44J

Bruce Arians is retiring. Tom Brady is on the market. Gotta be. Where is he headed? Give me your theories.

Todd Bowles is the #Bucs’ new head coach. Not interim. Bruce Arians walks away from coaching at the right time for Bowles to have an opportunity to win.

Matt Rhule is now the longest tenured HC in the NFC South … which is bonkers.

Sean Payton and Bruce Arians both step away in the same offseason.

Bruce Arians is moving to the Buccaneers front office & Todd Bowles is replacing him as Head Coach, per @peter_king pic.twitter.com/N67oq2xoCW

Bruce Arians really made a fascinating decision: Tom Brady comes back to the #Bucs, and he knows they’ll be good. Rather than have Todd Bowles take over a bad team or one in transition, he chooses now to pass it off. Arians made sure Bowles will coach a good team.

“This is how power grabs work. Bruce Arians and Tom Brady are two totally different personalities.”

Full statement from Bruce Arians, who says: “Before you start thinking this is about my health, don't. This is the best I have felt in many years and I'm looking forward to helping this team continue winning through my new role.” pic.twitter.com/AVPX96lhyM

We’ll have to see how this move affects the 2022 season. It does present an opportunity for Todd Bowles to win right away. The Bucs should still be the favorite in the NFC South.