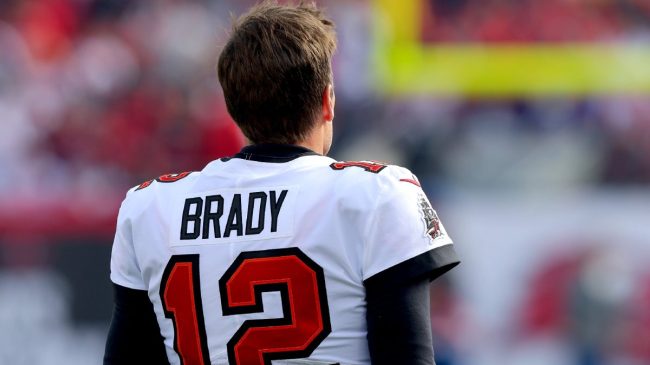 On Sunday, the veteran quarterback announced his intention to return to the Buccaneers for the 2022 season. His time away from the game lasted all of a month and a half.

The announcement brings bad news to a number of interested parties. First and foremost, it’s soul crushing for the person that just bought Brady’s “final touchdown” game ball for an absurd $500,000. It won’t be the last touchdown for much longer.

For those on the field, they’ll get yet another year of facing Brady.

At 44, he led the NFL in passing, narrowly missing out on another MVP season. What can he do at age 45?

With the unexpected news breaking, teams and players took to social media to voice their thoughts on having to line up across from Brady for another NFL season.

The reaction was quite funny.

As expected, the NFC South wasn’t happy to see another year of Tom Brady. In his two stints with the Bucs, he’s won a Super Bowl, won the NFC regular season crown, and made Tampa Bay a competitor.

The Panthers, Saints, and Falcons will have to face Brady and Co. twice more in the 2022 season. That’s something they’re not exactly looking forward to.

The Bucs, on the other hand, are ecstatic.

A few other notable teams reacted to the news, including AFC West rivals Los Angeles and Denver. The Jets chimed in, too.

The Jets’ and Chargers’ reactions, in particular, were hilarious as they also posted something on the day of Brady’s retirement. They might want to go back and delete that.

There were a few players from around the league talking about Brady’s return, too. Check out some of the commentary below.

THANK YOU❕ throw that last touchdown on somebody else 😂 https://t.co/oum3tYbjbl

Tom Brady after hearing about his kids day at school for 2 months straight😂😂 pic.twitter.com/oaqBy4GpB9

Love him or hate him, we’ve got at least one more year of Tom Brady.