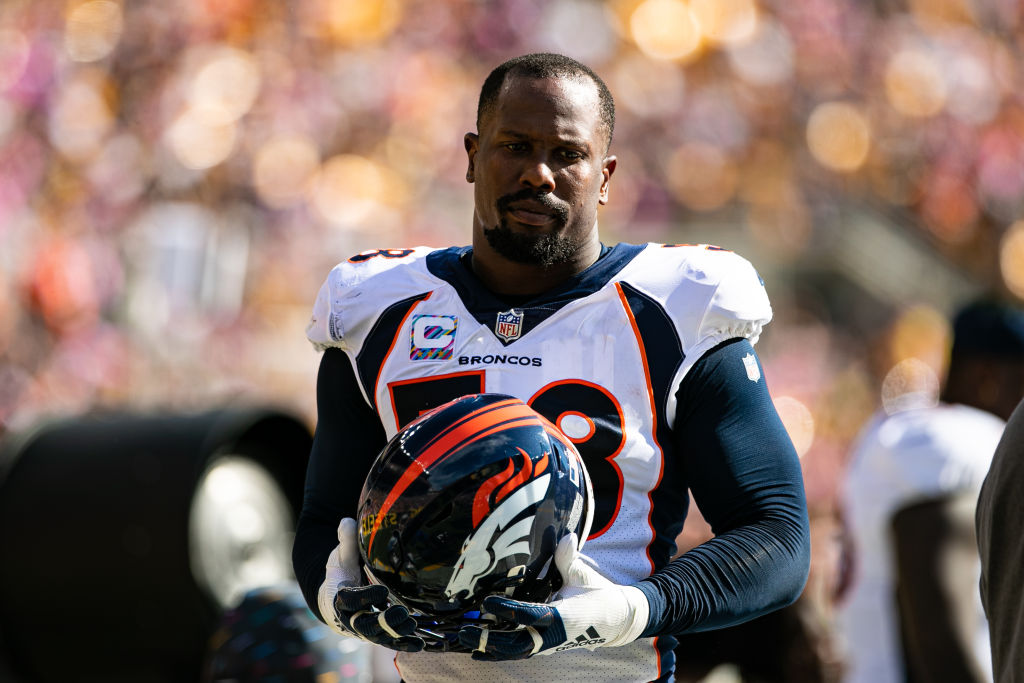 Denver Broncos linebacker Von Miller got off to a hot start in the 2021 NFL season. He had 4 sacks and 6 solo tackles through the first 3 games and he hasn’t played less than 70% of the defensive snaps in a game yet this season.

Miller and the Denver Broncos (3-3) will travel to face the Cleveland Browns (3-3) in Week 7. And the 32-year-old 8x Pro Bowler and former Super Bowl Champion briefly shocked the football world on Tuesday by saying he was “going to kill” someone on the field on Thursday Night Football this week.

Surely he wasn’t saying that he was going to actually murder another player on the field but his comments definitely turned some heads. Here’s the full quote:

NFL fans were quick to respond to Von Miller’s ‘going to kill him quote’. And I felt obliged to share some of the best reactions with you gentlemen here today.

unwise statement. malice aforethought will now be much easier to prove.

This is bulletin board material for the #Browns offensive line . https://t.co/xMZOXwR1Wr

Last time we got pissed off Von Miller the Denver Broncos defense took the soul of every member of the Arizona Cardinals when Vance Joseph was HC.

That was also the game where I saw possibly the greatest rep from Miller where he destroyed the guard or tackle and sacked Rosen.

Since he is admitting to it in advance, can't we have him arrested, or at least detained, prior to the game ala the Minority Report.

Like he did against the Raiders and Steelers terrible lines? 🤣 Thanks for the bulletin board material Von 👍

Easy to promise that when you're going against backups. He didnt do a thing against oakland and pittsburgh

I remember when we could take Von seriously. He says stuff like this all the time. We will be lucky if he gets 1 sack.

Lmfao for someone that disappeared against the Raiders, he sure is talking a whole lot.

Baker saw that quote and decided that shoulder needs an extra week. Good luck to the backup, Case Keenum. Von about to catch a charge on Thursday 👀

He should put tombstones in his front yard as decoration

How long before he has to apologize for his choice of words?

Even with a struggling Baker Mayfield, the Cleveland Browns are 3.5 point favorites over the Broncos and -175 favorites on the moneyline. So it will be interesting to see if Von Miller’s words fire up any adventurous gamblers into backing the Broncos on Thursday night.