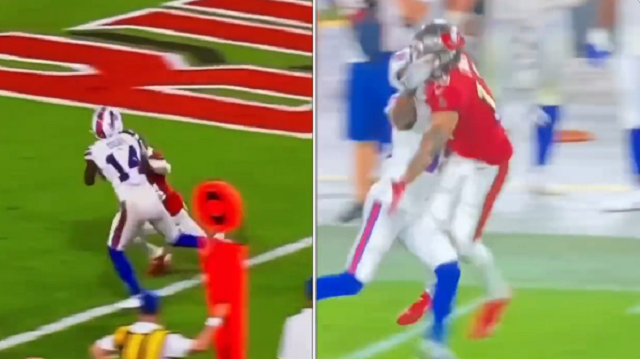 Fans believe the refs in today’s Bills-Bucs game were biased towards Tom Brady.

While the Bills were down three points late in the fourth quarter, fans believed refs missed a crucial pass interference penalty on the Bucs.

A few minutes later in overtime, the Bills were called for pass interference on a similar-looking play.

the CBS broadcast temporarily broke itself because of how bad the pass interference call against Levi Wallace was in his coverage of Mike Evans pic.twitter.com/pDYaoDxzjl

Here are the two plays side-by-side.

Think we all knew Brady would get the pass interference call that wasn’t called before…#BUFvsTB #Bills pic.twitter.com/EfcfR4xjNp

Even Sunday Night Football analyst Terry McAulay believed that the Bills should have not been called for pass interference and noted how it wasn’t called earlier on the Bucs.

This is not defensive pass interference. The receiver creates the contact. It is especially noteworthy given what was not called late in regulation on the Buffalo 3rd & 2 play. https://t.co/jQpWye03IO

Fans were not happy and accused the refs of rigging the game for Brady.

Valiant effort on the comeback, but it's just not enough. I try not to fault the refs, but awfully hard to beat Tom Brady & the refs. Brutal.

Refs always saving a Brady team. What else is new