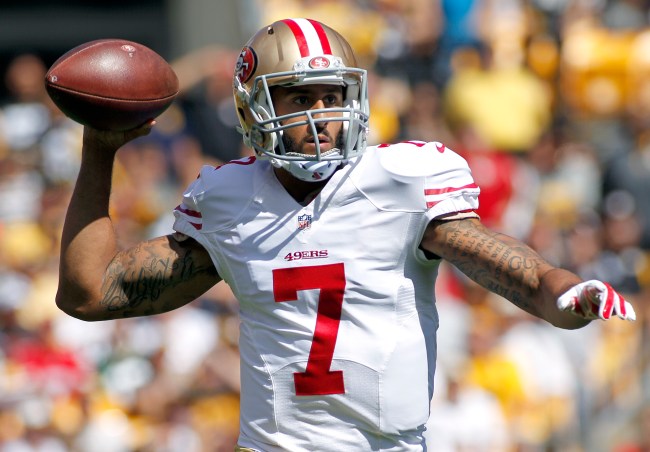 Just last year Colin Kaepernick held an open workout for several NFL teams and said his intentions were to play in the league again despite the fact that no team has reached out to sign him in three years.

“To all the people who came out here today to support — I appreciate y’all, I love y’all. To the people that aren’t here, I’m thinking of you, I appreciate your support from where you are. We’ll continue to give you updates as we hear. We’ll be waiting to hear from Roger Goodell, the NFL, the 32 teams — we’ll let you know if we hear from them.”

Today, several people noticed that the NFL’s website has listed Kaepernick as “retired” which didn’t sit right with many, include Kaep’s girlfriend Nessa considering he’s never handed in his retirement papers and has continued to lobby to play in the league.

Ahead of the 2021 season, the NFL has removed Colin Kaepernick’s photo from his stats page and changed his status to “retired.”

Kaepernick has consistently expressed interest in playing. The NFL even scheduled a tryout last season. This is erasure.

The NFL recently redesigned its website. And the new version of the pages assigned to each current and historical player has created a bit of a stir: Former 49ers quarterback Colin Kaepernick is listed as “retired.”

The @NFL @nflcommish @NFLPA lying on their NFL website claiming @Kaepernick7 “retired.” Colin did NOT retire. You cowards blackballed him bc he peacefully protested against police brutality. He’s a Superbowl QB & should be playing bc his stats show that. https://t.co/UmyD5VhYwP pic.twitter.com/eUJ7LMmaiR

Thank you to everyone who held the @NFL accountable for falsely reporting that Colin “retired” on their website. They heard you loud & clear bc the NFL put the accurate description that @Kaepernick7 is a Unrestricted Free Agent (UFA). Tell them to stop denying him employment. pic.twitter.com/klK7a6qRTY