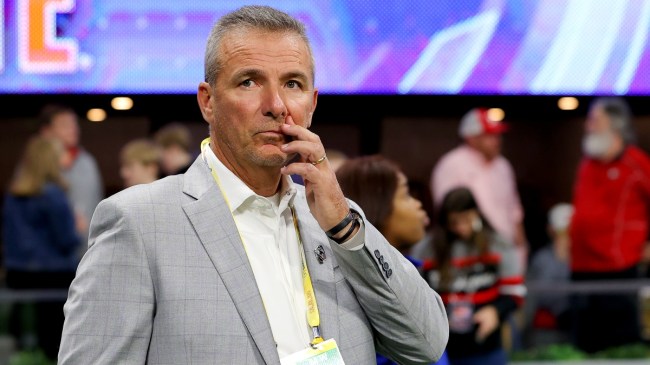 The Jacksonville Jaguars did the unthinkable and clinched a playoff spot. Their win streak, combined with the Tennessee Titans’ choke job, helped them clinch the AFC South crown.

However, many took to social media to roast former Jaguars head coach Urban Meyer. The team was a complete mess under his tenure and NFL fans aren’t letting him forget about it.

Jacksonville essentially locked up the win after a controversial fumble call late in the fourth quarter. Rayshawn Jenkins had a clear look at Joshua Dobbs, which led to Josh Allen scooping and scoring on the play.

Rayshawn Jenkins comes up with another clutch play for the @Jaguars!

This one-season turnaround really is impressive for the Jaguars.

Urban Meyer watching the Jaguars make the playoffs one year after going 2-11 with the same team pic.twitter.com/5Sk3mDvBzj

The Jaguars’ social media team didn’t hold back either. Albeit, they didn’t mention Urban Meyer. But it’s still a solid clip.

The Jacksonville Jaguars, one year removed from the awful stench that is Urban Meyer, have made the playoffs.

Their social team had this one ready to go…

Marvin Jones on the notion the #Jaguars were broken after last year with Urban Meyer.

“I think one person was broken. It wasn’t us,” he said.

Well, it looks like the Jaguars are on to bigger and better things without Urban Meyer. The state of the AFC South suggests this team should be the favorite next year and possibly beyond.