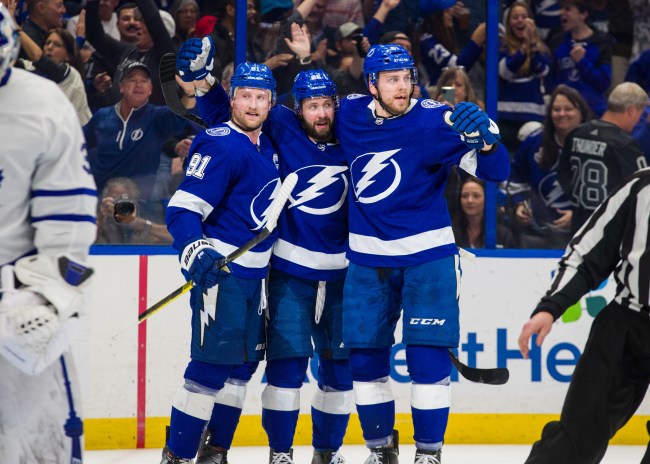 The NHL gave a detailed description of what life inside its bubbles will be like. The NHL has set up shop in two cities, Edmonton and Toronto, and these bubbles come with unique challenges compared to what the NBA and MLB are currently grappling with.

The two cities are broken out by Eastern vs. Western Conference and the teams will arrive in the cities this Sunday. Play will start with 12 exhibition games before the Stanley Cup Qualifiers kick off on August 1st. The qualifiers will consist of the top 4 teams in the East and the top 4 in the West each playing a round-robin tournament to determine the seeding. While this is going on, 8 ‘best-of-5’ series will take place to determine which teams advance to play the top 4 teams in each conference.

Life inside the bubbles will be a drastic change from what a lot of these players are used to. For starters, there will be hundreds of security guards and the players will be fenced inside to keep them safe from the general public:

The NHL is using three hotels in Edmonton within walking distance of Rogers Place to house all players, coaches and staff. The League is using two hotels in Toronto, one at Exhibition Place and the other near Scotiabank Arena.

There will be a fencing system running through each location to keep everyone inside the bubble secure and away from the general public. There will be 97 security guards and health ambassadors in Toronto and 125 in Edmonton. (via NHL)

There will be daily testing and players will have their results within 24-hours thanks to an NHL partnership with local labs. They’ve also worked with CLEAR to develop an app to streamline the process which will include touchless health-screening kiosks.

Despite being fenced off from the outside world, players will still be able to order food and receive other amenities thanks to a ‘concierge system’ developed by the league:

Restaurants in the secure zones, some already in place and some the League is creating with the help of local chefs, will open early in the morning until late at night. Mayer said there will be a variety of food choices.

The League also created a concierge system by working with outside delivery companies to allow anyone in the bubble to get food, pharmaceutical needs and goods delivered from outside vendors.

The layout in each hub city includes designated space for indoor and outdoor activities, including movie theaters, player lounges, patio decks and recreational space. Players in Toronto will have use of BMO Field in Exhibition Place, home to Toronto FC of Major League Soccer.

Each hotel has team meeting rooms, meal rooms and fitness facilities. There will also be exclusive areas in the arenas for players to watch the other games. (via NHL)

They won’t be using fake cardboard cutouts of fans or teddybears in the seats. Instead, they’re going with a tech-forward approach using ‘LED screens, monitors, and stages’ throughout the arenas to create an atmosphere that’s friendly for television.

The NHL has also collected a bunch of assets from teams like their goal songs, goal horn sounds, motivational videos, and the in-arena music used by the various teams to keep things somewhat similar to what the teams would experience on home ice.

They are also using 32 cameras per game versus the usual 12 which should, in theory, give TV audience visuals unlike anything they’ve ever experienced before.

To keep things even, every team will receive the exact same amount of practice time on the ice. Each team will have one hour to clear out of the locker room after games before they are cleaned and disinfected before the next team arrives. Both Edmonton and Toronto will use separate practice facilities, each with four rinks.

For practices in Edmonton, the NHL is using Rogers Place and Terwillegar Arena, which has four rinks and is a 25-minute drive from downtown. All practices in Toronto will take place at Ford Performance Centre, the Maple Leafs training facility that has four rinks.

Each market will also have a minimum of 15 workout facilities. The NHL has gotten more than 1,000 cases of Gatorade, 1,000 practice pucks and 12,000 shower towels for each hub city for the Qualifiers.

“The idea was to have everything in place so when the teams did get here they were focusing on mainly what they’re here for,” said Kris King, NHL senior vice president of hockey operations. “That’s winning hockey games, competing for the Stanley Cup.” (via NHL)

Just like with the NBA, I’m having trouble wrapping my mind around these guys where the poorest player in the room is still a multi-millionaire all walled inside of a hotel compound and forced to live under restrictions when they’re used to a jet-setting lifestyle that allows them to go anywhere and do anything they want at anytime.

With that said, go Bolts. Last year’s historic collapse in the First Round has haunted every Tampa Bay Lightning fan and I’m sure the players have lost countless hours of sleep since then. It’s time for some damn redemption.