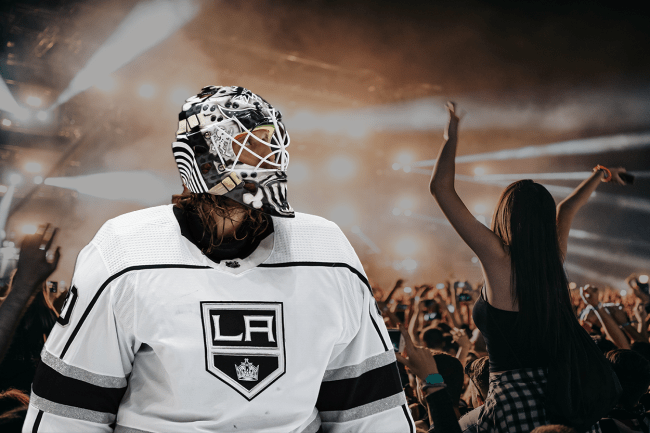 When Lollapalooza released its lineup for 2022, there was one name that stands out. Not because it is the most well-known artist of all-time, but actually, because of the opposite.

It’s one of this “if you know, you know” kind of things.

At the very bottom of the star-studded lineup, the very last name reads ‘Bucky Cheds.’

If you asked most music fans if they know who ‘Bucky Cheds’ is, the vast majority of them would not know who he or she is. If you asked hockey fans, however, they might.

Probably not, but maybe.

Sparks, who has spent time with the Vegas Golden Knights and Toronto Maple Leafs, currently plays for the Ontario Reign of the AHL and is part of the Los Angeles Kings organization. He is a goalie by day and DJ by night.

Sparks has been in charge of pregame mixes for a few years now, but rarely takes his talents beyond the locker room. Now, it would appear as though he is set to break out and play one of the biggest stages in music.

While with Toronto, Sparks spoke about his music career. He says that he got into mixing music because one of his teammates growing would make warmup mixes on a DJ program and he thought it was cool.

One day, Sparks decided to give it a try, and while competing at World Juniors in Russia, he learned how to make a mix during the downtime. He loved it and the rest is history.

A few years ago, as Sparks was leading the Toronto Marlies to a Calder Cup (the AHL version of the Stanley Cup), he was not only one of the league’s top goalies, but he got his team ready to play with his custom mix for warmies. They probably would not have won without Sparks in net and Bucky Cheds on the 1s and 2s.

Bucky Cheds only has 300 followers on Soundcloud, so people aren’t quite onto him just yet. Maybe Lollapalooza will be his big come-up?