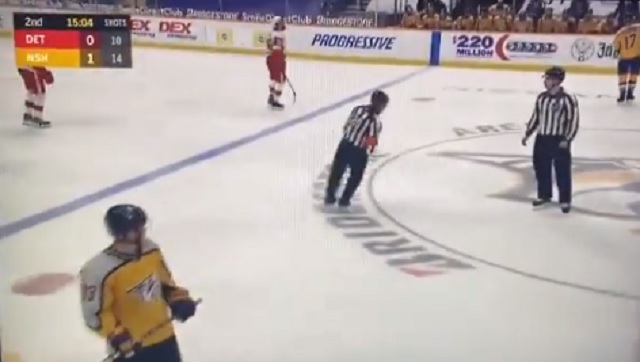 Nashville Predators fans are not happy with an NHL ref who was caught admitting to calling a bogus penalty on purpose.

During Tuesday night’s Predators-Red Wings game, a ref was busted on a hot mic saying “there wasn’t much but I wanted to get a f*cking penalty against Nashville.”

Lol the ref in Nash/Detroit just got caught on a hot mic admitting a penalty was a make-up call. “there wasn’t much but I wanted to get a f*cking penalty against Nashville.” what a league @nhl

Here’s the tripping penalty that was called by the ref.

Update: The NHL identified the referee as Tim Peel and he appears to have been fired.

Referee Tim Peel no longer will be working NHL games now or in the future. https://t.co/mrnDc61W5P pic.twitter.com/tKsg2SwGh8

Fans crushed the ref and demanded the NHL take action against him.

Because calling penalties for the sake of them being actual penalties is too easy. This is clear evidence of a ref trying to manage a game themself, but you can’t say anything about it without facing a fine and the NHL will turn a blind eye (deaf ear?) to this. What a joke. https://t.co/SvJw3Kkjuo

@NHL Is this how your refs do things??? Nothing like a hot microphone to expose Tim Peel. Not a good look! https://t.co/KXnTeN9ls0

Want to grow the game?

Stop allowing officials to blatantly choose game management over making the correct call. Especially when it comes the health and safety of the player https://t.co/I6ZUtgThgt

Hey @NHL DO BETTER! GET SHIT LIKE THIS OUT OF THE GAME! @NHLNetwork @NHLPA @TheAthleticNHL https://t.co/gcCbjRrB69