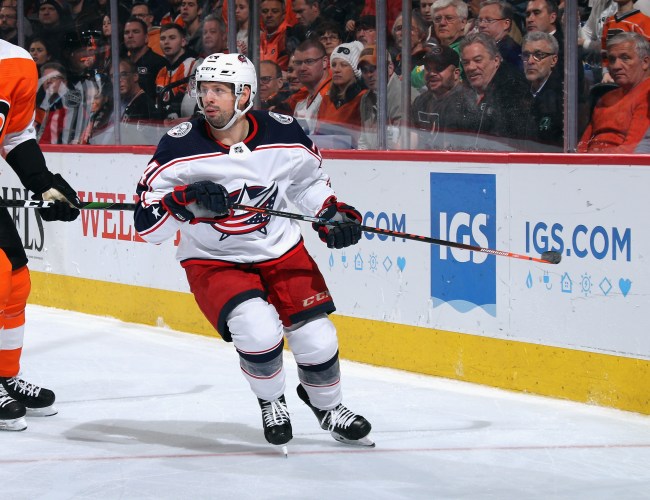 Not only is Nathan Gerbe the shortest player in the NHL right now, at only 5’4″ tall he is the second shortest player in the entire history of the National Hockey League. That is SHORT for a pro athlete. We’re talking Astros’ Jose Altuve short but in the case of Altuve a scout allegedly lied about Jose’s height years ago so teams would take his scouting report seriously and Altuve’s listed at 5’6″ when in reality, if you’ve ever seen Jose Altuve up close he’s quite possibly only 5’2″ at best.

Anyway, the shortest player in the NHL was skating for the Columbus Blue Jackets last night against the Philadelphia Flyers when he squared up against Claude Giroux who stands a full 11-inches taller than him. Gerbe won the fight AFTER he threw down a gargantuan hit on Giroux.

To be clear, that was 100% a clean hit on Giroux. Travis Sanheim (Flyers) appears to have taken exception to Gerbe’s hit on Giroux and went to the defense of his captain. That’s what sparked the fight between Gerbe and Giroux, not the completely clean hit.

Shout out to Hot Clicks for sharing this clip:

I imagine that Giroux never expected to be completely leveled by a 5’4″ player. If I was in his skates I probably would’ve had a laugh about it to myself. And then I’m sure he never expected to lose the fight but then again I imagine Giroux wasn’t giving it his all because it would’ve been like a grown-ass man beating up a teenager.

What’s wild is this isn’t even the first time this season that Nathan Gerbe threw the gloves and came to blows with a player who was a foot taller than him. Here he is fighting New Jersey Devils’ Damon Severson a few weeks back:

I’ll be curious to see if this trend of Gerbe throwing the first punch on guys a foot taller than him keeps up or if it ends with some sort of snap back to reality.