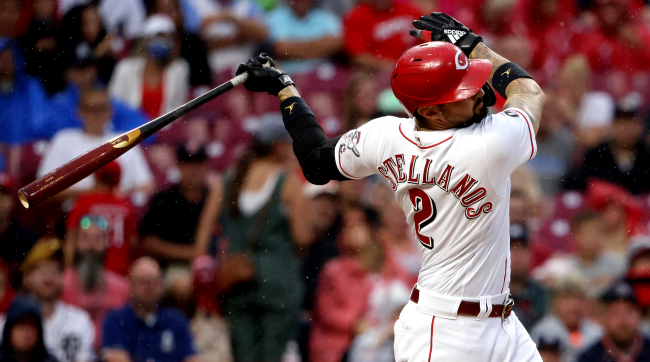 The Cincinnati Reds were expected to be a pretty good team in a relatively weak division in 2022. Cincy fans were very excited to see how their team, coming off back-to-back seasons in which the Reds have finished above .500 – the first seasons they have had a winning record since 2013.

Instead, the Reds decided to put the anti-tanking measures Major League Baseball implemented in the new collective bargaining agreement with the players to a very rigid test.

Following the CBA being signed, Cincinnati almost immediately traded away one of the best pitchers, Sonny Gray, and probably their two best position players, Jesse Winker and Eugenio Suarez.

Were the Reds doing this in an effort to save money so they could re-sign outfielder Nick Castellanos, who hit .309 with 34 homers and 100 RBI in 2021?

Castellanos ended up signing a new contract with the Philadelphia Phillies.

On Monday, John Clark of NBC Sports Philadelphia caught up with Castellanos to talk about why he made the move and Phillies’ owner John Middleton willingness to go over the luxury tax to sign him.

“That’s a lot of respect. At the end of the day, baseball comes down to ownership,” he said. “The owner either wants to invest and cares about winning, or doesn’t. So it speaks a lot to who he is. So Philadelphia should be pumped that that guy is behind the Phillies.”

Nick Castellanos' first interview as a member of the Phillies 🤩@JClarkNBCS catches up with Castellanos upon his arrival to Philadelphia: pic.twitter.com/MxJOkMPug3

While Nick Castellanos did not mention Reds owner Bob Castellini specifically by name, it doesn’t take a genius to understand what he was hinting at with his response.

Cincinnati Reds fans, still not happy over their team obviously tanking the 2022 season, were also able to read between the lines.

Related: Ken Griffey Jr. Will Be The Sixth Highest Paid Player For The Reds In 2022

He spoke more about the Reds organization than he did the Phillies right there. Dude wanted to stay yet the reds ownership showed his true colors. SMH

Shots fired at the Reds 👀👀👀

Who would have thought the day would come that Mike Brown (infamous owner of the Bengals) cared more than the owner of the Reds?

Nick and Jesse's initial interviews are very telling about our ownership. Just confirms what most fans believe.