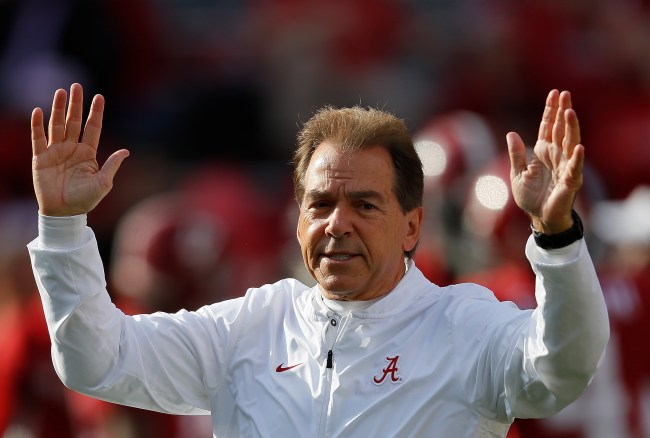 Alabama is set to host No. 3 Georgia in an SEC showdown on Saturday and after testing positive, Saban will not be coaching from the sideline. He immediately left Alabama’s facility after learning of his positive test and remotely participated in Alabama’s practice on Wednesday while quarantining in his home. According to 247 Sports, Saban provided instruction over the phone and had access to a live video feed of the Crimson Tide’s practice.

One might imagine that Saban would be able to coach remotely on Saturday, but an NCAA rule will keep him from doing so. If he has to remain quarantined at his house, Saban would be prohibited from communicating with his team or any of his coaches beginning 90 minutes prior to kickoff until the end of the game.

This same scenario played out for Florida State earlier this season when head coach Mike Norvell tested positive. He was able to remotely prepare his team during game week but wasn’t able to have any contact with his Seminoles before or during the game.

As for who steps into that head coaching role for the Crimson Tide on Saturday, Saban explained that offensive coordinator Steve Sarkisian will be the No. 1 coach on the sideline.

“The autonomy part, we haven’t really decided yet,” Saban explained. “But in light of the fact that any coach can test positive, we try to have a protocol in place for if we lost a coach, especially one in a leadership position, who would step in for them. Obviously, Sark’s been a head coach before.”

At this point, an official decision has not been made as to whether or not Saban will have to be isolated in his home for Saturday night’s game, but it’s certainly looking like that will be the case given how recent his positive test was received.